Australians will be able to save hundreds of dollars a year from October 1 as prices are cut for more than 2000 medicines covered by the Pharmaceutical Benefits Scheme.

And people will now be able to go online and calculate their savings, with non-concessional patients and those with multiple chronic conditions set to benefit most from the changes. 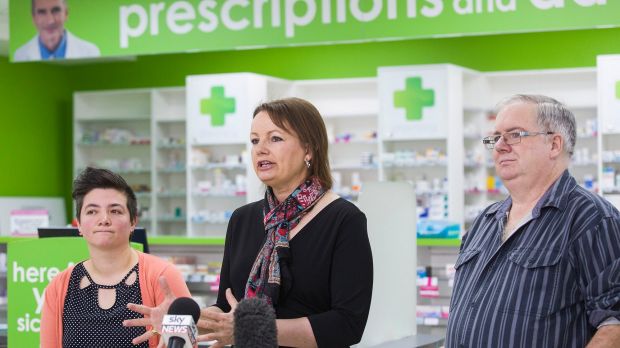 Federal Minister for Health Sussan Ley addresses the media about a new round of medicine price drops which will take effect from October 1. Glen Tilley and Lou Vickers-Willis, pictured, believe they will benefit from the discounts.  Photo: Paul JeffersThe cuts to the price of medicines, one of the largest ever, has been driven by a shift to greater use of generic brands and the savings will multiply for people taking drugs for multiple conditions.

Health Minister Sussan Ley said the reductions were a result of reforms passed last year and would allow the reduced price of cheaper generic brands to be used as more expensive “originator” brands were removed.

“This will deliver savings for both consumers and taxpayers,” she said.

“In some cases, even where there is no change to the consumer price, there will be a reduction for taxpayers, who fund the PBS because the government is paying less for those medications.”

All up, about 80 per cent of the 2000 medicines that will fall in price on October 1 would deliver a saving to consumers.

The remaining 20 per cent of items that were priced above the general PBS co-payment of $38.30 would deliver savings to taxpayers of about $900 million over four years, she said.

Under the price cuts, a person being treated for diabetes, osteoporosis, high blood pressure and gastric reflux would, for example, save $35 a month and about $410 a year.

A patient with osteoporosis, high blood pressure and glaucoma, taking three drugs, is expected to save $31 per month and $380 per year.

And a person taking medicines for breast cancer, generalised anxiety disorder, chronic pain and drug-induced constipation will save $7 a month and $86 a year on scripts.

In 2016, the government passed “PBS Access and Sustainability” reforms, aiming to crack down on “perverse incentives” in the health system by removing basic over-the-counter medications from the scheme.

“Over the last few years we have tried to make processes simpler and as easy as possible for patients and indeed we now have 96 per cent of all rebates done electronically. Now what this means is that a patient can go to their GP, they swipe with their Medicare card and they have to do no more than that.”

“Ninety-nine per cent of all claims are processed within 10 days and that will continue under the new arrangement,” he said.