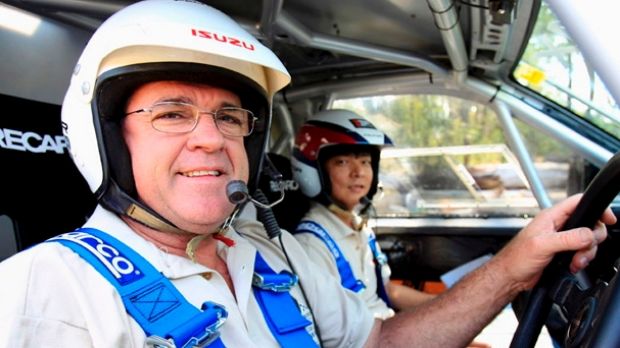 Rally car driver Bruce Garland felt ripped off by the high cost and lack of price transparency for his prostate surgery.

Rally car driver Bruce Garland was happy with the results of his prostate surgery but was left with a feeling he had been ripped off.

The costs associated with the surgery were listed to show the fees for the equipment and the surgeon, but a disclaimer said there may be other fees for assistance.

“There was nothing wrong with the job, but it was just the cost of it, and we had to pay upfront.”

Mr Garland, who was asked to sign a non-disclosure agreement on the quote, is one of many patients who are left feeling diddled by the opaque pricing of specialists.

Research shows specialist doctors charge more to patients with higher incomes and reduce their fees for low income patients, but not by enough to stop some patients being priced out of the market.

A study on price discrimination among specialist doctors has found that the poorest patients were charged 19 per cent less for an initial consultation than high-income patients, in what economists interpret as a lack of competition in the market.

Co-author Kees van Gool, an economist at the University of Technology, Sydney, said specialists were probably able to charge differential amounts because of the lack of transparency around prices.

“No specialist really advertises their prices so you’ve got to actually ring around,” Associate Professor van Gool said.

“And even if you do that, you’ve got to go back to your GP to get the referral to the particular specialist you want, so it’s a really complex and costly process and that’s actually a barrier to competition.”

The study, Bleeding Hearts, Profiteers, or Both, used patient data from a large population survey that was linked to administrative records to compare the amounts charged by individual specialists to people in the top 25 per cent of income distribution and those in the bottom 25 per cent.

It found about 80 per cent of specialists charged higher fees to higher income patients, with an average difference of $26.38.

Associate Professor van Gool said although low income people were charged less than higher income, the discount was often inadequate to entice them to see a specialist.

“Specialist services funded by Medicare disproportionately go to wealthier sections of the community,” he said.

“We suspect it’s because the out-of-pocket costs are still very high, so affordability is still an issue.

“What we would like to see is specialist care being driven by clinical need rather than affordability.”

A husband-and-wife medical team are attempting to capitalise on the appetite for a more competitive healthcare market with a bulk-billing GP and specialist chain.

Collective.care co-director Suzan Bekir, a GP who set up the business with her ear, nose and throat specialist husband Tobias Pincock, said her patients had been complaining about long waiting times to see specialists and few who offered to bulk-bill.

“We wanted to create an efficient system where patients had access to specialists, because that’s a major problem.

“People think bulk-billing means no frills and it must be a low-quality service. It can be affordable and professional at the same time.”

The Royal Australasian College of Surgeons changed its code of conduct in 2014 and promised to crack down on members who charged exorbitant amounts with penalties ranging from censure to expulsion from the college.

But RACS executive director of surgical affairs John Quinn said no surgeon had been sanctioned for overcharging since then.

“We’ve had few complaints from patients or surgeons, which surprised us,” Dr Quinn said.

“It might be that there are some fees that we thought were a bit excessive but the patients are accepting. Probably what’s happened is some surgeons have changed their fees.”

After his prostate surgery, Mr Garland found out that urologists in his home state of Queensland charge a fraction of the Sydney rate for robotic surgery, and that he may have been suitable for cheaper treatment such as radiotherapy. He has gone from feeling like a patient, to a victim of price collusion.