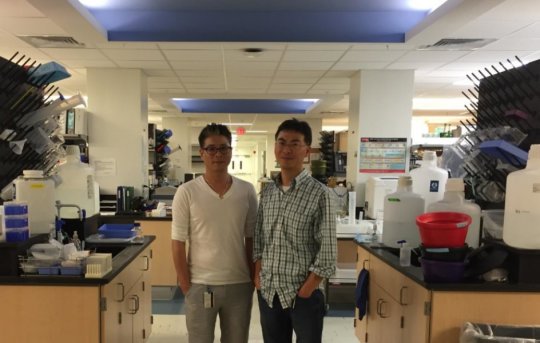 Researchers at the University of Virginia School of Medicine have discovered a flaw in the armor of the most aggressive form of lung cancer, a weakness that doctors may be able to exploit to slow or even stop the disease. Remarkably, this vulnerability stems from the very aggressiveness that makes the cancer so deadly.

Using an existing drug, the scientists were able to halt the progression of small cell lung cancer tumors in genetically engineered mice. This was a notable achievement because small cell lung cancer (SCLC) is known for spreading quickly throughout the body. The finding raises the hope that the drug, which is being tested in people overseas for several types of cancers in clinical trials, might prove to be an effective way to control or prevent small cell tumor growth — possibly keeping the cancer as harmless tiny lesions.

Even if the drug does not prove effective for that purpose, the researchers have identified a tantalizing target in the battle against a particularly deadly form of cancer. They believe their approach could lend itself to the development of new drugs that would target the cancer progression while sparing healthy cells.

Notably, small cell lung cancer is seen almost exclusively in smokers. UVA’s Kwon Park, PhD, of the Department of Microbiology, Immunology and Cancer Biology, was seeking to better understand why that is when he and his team discovered the potential way to undercut tumor development.

Park was investigating whether a mutation in the gene MYCL was what is known as an oncogene — a gene that drives tumor development. His team determined that the gene did, in fact, have an important role to play. Amplifying its effect spurred tumor growth in genetically engineered mice, while blocking it suppressed tumor growth. Unfortunately, there is no known drug that could be used to target the gene in people.

So Park took another approach. He looked at what the gene was doing, to see if it would be possible to target the results of the gene’s activity, rather the gene itself. “It turns out that this master oncogene regulates these protein assembly machines called ribosomes,” he said. “For a cell to divide faster, you need everything faster. Not just DNA but also the proteins. By making more machinery at a faster speed, [the oncogene] actually promotes tumorigenesis.”

Maybe there’s no way to get at the oncogene, Park thought, but perhaps there’s a way to stop the amped-up protein production it causes. Through a stroke of luck, there was a drug available to do just that. And it worked: Tumor growth was inhibited significantly.

It’s important to note that the drug used in what Park called his “proof-of-concept pharmaceutical experiment” is not yet available to patients. It’s being evaluated for other forms of cancer in Australia and Canada, but it’s not being tested in patients in the U.S., so much work would need to be done to determine if it would be safe and effective for this purpose. Regardless, the research has identified a potential back-door way to block a critical aspect of the tumor-production process in small cell lung cancer.

Park noted that the finding could potentially lead to a preventative strategy involving food and nutrition, so that people could modify their diets to reduce their chances of developing the disease.

The above post is reprinted from materials provided byUniversity of Virginia Health System. Note: Content may be edited for style and length.