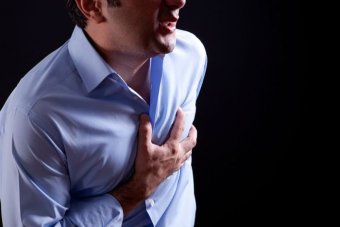 Photo: Tasmanians in poorer communities are being advised to make lifestyle changes. (iStockPhoto/fatihhoca)

The Australian Heart Maps show Tasmania is worse off for hospital admissions for heart-related diseases than Victoria, New South Wales and Western Australia.

They have been created using State Government heath data from 2013 to 2014.

“There’s a great divide between regional and metropolitan Australia right across each state and territory, and Tasmania as a whole tends to mimic the regional results,” he said.

In Tasmania, eight local government areas, including George Town, Burnie, Devonport and Waratah–Wynyard, had a rate of at least 57 per 10,000 people admitted to hospital for heart-related conditions.

These eight areas with the highest admission rates were ranked in the top three of ten socioeconomic categories of disadvantage.

In contrast, local government areas such as Kingborough, Hobart and West Tamar, had admission rates below 39 per 10,000 people.

“Unfortunately in Tasmania, we can see that we are above the national average for most of these risk factors.

“Of particular concern is the proportion of Tasmanians who have high cholesterol and high blood pressure. These are future heart attacks just waiting to happen.

“We need to help Tasmanians become more physically active, improve the availability of, and their access to healthy food, and for them to become smoke-free.

“It’s very clear that there is a relationship between the areas that are most socially deprived, and the areas of heart disease,” he said.

“The bigger challenge is how do we stop this happening, or how do we delay it?

“You have to look at how you manage to socially engineer these communities and reduce the social deprivation.”

“I think we have to target the high risk individuals within communities. We’ve got to look at primary care resources, [and] make sure patients have got access to primary care and access to secondary care,” he said

“We recognise that there is a gap in terms of the provision of cardiology services in the north-west of the state, which we’re addressing and we’ve now got funding to appoint cardiologists in these areas.”

Dr MacIntyre said he would like to see an improvement in the interaction between primary healthcare and hospital acute care services.

“We’ve got very good GPs in Tasmania, but the overall standard is variable and we need mechanisms that brings that right up, that they all rise to the same standard and deliver effective cardiovascular and primary care.”