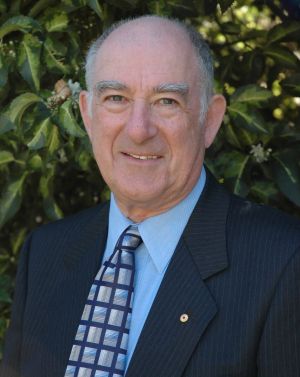 W. Brian Fleming was born in Zeehan, Tasmania and was educated in Burnie before moving to Melbourne to complete his secondary education at Scotch College, graduating in 1943.

He was able to make the wartime quota for medicine, and as medical students were exempt from call-up began his medical training at the University of Melbourne Medical School in February 1944.

Brian’s clinical training was undertaken at the Royal Melbourne Hospital (RMH), and he graduated MBBS in November 1949. He became an intern at the RMH in 1950 and a senior house surgeon the following year. He became a resident surgical officer in 1952 and married Margaret in July the same year.

In December 1953 Brian attained his Fellowship of the Royal Australasian College of Surgeons (FRACS), and combined his surgical duties with research as the Randal and Louisa Alcock Scholar in Pathology. In May 1954 he received his Master of Surgery by examination, and in June was appointed to his first job as a trained surgeon.

He was discharged to the Army Reserve as a consultant surgeon for the Southern Command, a post he held until 1972. He was earmarked for a stint in the UN Force in Laos, before the Vietnam War, but fortunately Australian forces were not required. Because of his young family, he was not needed to serve in Vietnam.

After further study in the UK and US, Brian attained his Fellowship of the Royal College of Surgeons in England (FRCS) in May 1955. From December 1955 he was appointed to the staff of the RMH, and in the following year to the staff of the Footscray and District Hospital.

In 1968 he received his Fellowship of the American College of Surgeons (FACS), and was appointed head of his own unit. As the years progressed he became recognised as a gifted specialist head and neck surgeon, serving both the Peter MacCallum and RMH in the field of cancer surgery.

The RMH recognised Brian Fleming’s exceptional leadership skills when he was appointed chairman of the Division of Surgery and the head of the Medical Advisory Committee in 1975, two posts that he held until 1983. He was appointed head of the Head and Neck Service in 1980, and held this appointment until retirement.

He was appointed to the board of management in 1983 and became the junior vice-president of the hospital in 1986. He was the acting treasurer in 1989 and retired from the staff of the RMH, after 36 years service, in 1991.

Besides his commitments to the RMH, Brian was deeply involved in the services of cancer research and prevention outside the hospital. In the early 1970s cancer clinicians around Australia knew more about overseas practice than about what contemporaries were doing within a few hundred kilometres.

Brian added a further dimension to the care and compassion he gave to his patients.

The late Noel Newton and Leicester Atkinson in Sydney sought a like mind in Melbourne and were rewarded when Brian Fleming agreed to collaborate. He helped found the Clinical Oncological Society of Australia, becoming its first president from 1974 to 1976.

Brian was invited to assist the Anti-Cancer Council of Victoria, and as their delegate became vice-president (1980-1983) and then president of the Australian Cancer Society from 1983 to 1986. Beyond that he served the society in other ways, chairing its Medical and Scientific Committee, editing the cancer-related health check-up, advising on the National Cancer Prevention Policy, chairing a national consensus conference on cervical cancer screening and serving as a member of the National Cancer Advisory Committee. He joined the executive committee of the Anti-Cancer Council of Victoria in 1987 and became its vice-president in 1989. He was appointed as surgeon to the Health Department of Victoria Consultative Committee on Anaesthetic Morbidity and Mortality in 1991.

Brian was presented with the Australian Cancer Society Gold Medal for distinguished service in the fight against cancer in November 1992.

The president, Mrs Heather Wain, in presenting the medal said: “In his voluntary service to COSA, the Anti-Cancer Council of Victoria and the Australian Cancer Society Brian added a further dimension to the care and compassion he gave to his patients. Through his selfless commitment he has aided the advancement of cancer care for the whole Australian community and upheld the noble ideals of the medical profession.

“His example continues through his family, with a wife a former nurse, one daughter a nurse, one a science graduate, two sons who are doctors, and Melissa who decided to follow her father’s artistic talent into architecture. He deservedly joins a list of distinguished Australian cancer workers which includes a number of Victorians: Sir William Kilpatrick, Don Metcalf, John Colebatch and Ken Cox; his addition to the list adds to its lustre.”

Brian retired from active surgical practice and direct patient care in 1991, but continued in medico-legal practice in Melbourne and Mildura for many years. With the introduction of Workcover by the Kennett Government in December 1992, Brian was appointed a sessional conciliator, one of the few medically trained, and the only surgeon. He continued in this role to March 1996, and in May 1997 was presented with the inaugural Head and Neck Surgery Medal by the Royal Australasian College of Surgeons Section of Head & Neck Surgery.

Despite his advancing age, the Victorian Government acknowledged Brian’s exceptional skills as a wise and fair conciliator, appointing him to medical panels. He was regularly asked to keep going and was reappointed on into his 70s, before finally retiring from medico-legal practice on the occasion of his 79th birthday in 2006.

In leisure time Brian played golf and indulged in oil painting. He began exhibiting with the Australian Medical Association Arts Group in 1962, three years after its inception. He had one painting entitled Banksia, bought by Sir Daryl Lindsay, chairman of the Commonwealth Art Advisory Board for the Australian Government Collection, and two paintings were purchased by John McEwen, Deputy Prime Minister.

Brian was awarded the Membership of the Order of Australia (AM) on June 11, 2001, for service to medicine, particularly oncology treatment as a head and neck surgeon, and as a medical administrator.

He is survived by his wife Margaret, his five children Helen, Judy, Bill, Rick and Melissa, and by his seven grandchildren.