Have you ever looked at yourself in a full-length mirror and wished you looked more like the beautiful people who grace the covers of glossy magazines? If so, you are by no means alone.

Body dissatisfaction is so prevalent that some academics have referred to it as “normative discontent”. Many of those affected not only feel dissatisfied with their bodies, they actually believe they are heavier than they really are – a phenomenon known as body size misperception.

Our recent study found that people’s perception of their own and others’ body weight could change in as little as two minutes.

Participants were asked to view images of people that had been digitally manipulated to appear lighter or heavier than they actually were and decide whether these images looked fatter or thinner than “normal”.

After 120 seconds of exposure to manipulated thin bodies, the original-sized body images looked abnormally large to participants while the thinner images were rated as normal.

The opposite was also true: exposure to heavier bodies made participants see original body sizes as skinny.

It is hardly news that many are negatively affected by the thin, supposedly ideal images propagated by the media.

The connection between social pressure to be thin exerted by these images and feelings of body dissatisfaction – a risk factor for developing eating disorders such as anorexia nervosa – was first made by German psychologist Hilde Bruch in the 1970s.

Then, in 1980, a study showed that the measurements of Miss America contestants and Playboy centrefold models between 1959 and 1979 were decreasing, supporting claims that the media’s “thin is beautiful” message was spreading.

Although many studies in the intervening decades have confirmed this link, there is still relatively little understanding of the brain mechanisms underlying the perception of our own bodies in relation to what we see on TV and in magazines.

Since the time of Aristotle, it has been known that prolonged viewing of certain stimuli can cause after-effects that alter the perception of subsequently viewed objects. Often, the after-effect produces an appearance that neutral stimuli are in a sense opposite to the original stimulus to which the observer was overexposed.

One famous example is the motion after-effect – also known as the waterfall illusion. Here, exposure to movement in a particular direction, such as the downward motion of a waterfall, can cause stationary rocks beside the waterfall to appear to move in the opposite direction, that is upwards.

Similar effects can be seen for other object properties, such as colour. As these phenomena have been studied for centuries, their physiological basis is pretty well understood. After-effects are accompanied by a reduction in responsiveness of neurons in the visual areas of the brain.

These reductions were once assumed to be the result of tiredness of the overworked cells, but more modern theories propose that the change in brain activity serves to tune our perceptual systems to the environmental conditions. This gives us a frame of reference for what is normal or expected as determined by our visual diet throughout our lives.

Although early studies concentrated on simple stimuli, such as motion or colour, our recent investigations have shown that higher-level properties, such as body size and shape, can cause similar after-effects.

It is likely that the neural adaptation associated with these after-effects is the underlying physiological basis of body-size misperception.

Our recent study showed that after-effects could actually transfer from others’ bodies to the perception of one’s own. That is, viewing abnormally thin versions of other people’s bodies caused participants to see themselves as heavier than they actually were and vice versa.

While this observation fits nicely with the narrative connecting media exposure with body-size misperception in the real world, it also suggests that mechanisms mediating the perception of one’s own and others’ body size and shape are overlapping.

Variety is the spice of life

To give one example, group treatment of people with anorexia nervosa, as commonly occurs in specialist treatment facilities, may be inadvisable given that exposure to extreme body shapes of other sufferers can exacerbate the misperception of one’s own body size.

But what should be the advice for us, the dissatisfied mirror-gazers in the general population? While a healthy lifestyle brings many benefits, a strict diet will not correct the misperception of one’s own body size.

Instead, the over-sized person you see in the mirror may be more effectively beautified by changing your visual diet. In visual stimuli, as in food, moderation (of skinny celebrities) is key. And, of course, variety (in terms of shape and size) is the spice of life. 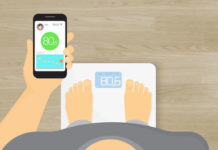 Too fat, too thin? How do you work out your ideal weight?