A refugee on Nauru with a growing lump in her breast has had her medical flight for treatment postponed indefinitely but has not been told why.

The 39-year-old Lebanese mother of four has had several scans over the past eight months that indicate the lump is growing, and doctors have requested she undergo a biopsy.

This week, more than a dozen refugees and asylum seekers who were scheduled to be flown to Papua New Guinea for medical treatment say they were told their flight, and their treatment, had been postponed for at least three weeks.

They were not told why their flights had been postponed but it has been reported that uncertainty over the legality of Australia’s offshore detention regime in that country has caused the flights to be abandoned.

The PNG supreme court ruled in April the Manus Island detention centre was “illegal and unconstitutional” and a decision in a second court challenge is imminent, which may further undermine Australia’s offshore regime there.

The woman on Nauru, whom the Guardian has chosen not to name, arrived in Australia in July 2013.

She first noticed a lump in her left breast about three years ago, but has developed increasing breast pain while living on Nauru, and has experienced a yellow-green discharge from her breast.

She underwent her first breast ultrasound on Nauru in late 2015. A subsequent ultrasound found two irregular masses in the woman’s left breast and confirmed at least one is growing.

Dr Paddy McLisky from Doctors 4 Refugees said a biopsy should have been arranged with some urgency at the first available opportunity.

“This is a medical scenario in which a biopsy is necessary to obtain a diagnosis and most importantly to rule out malignancy.”

McLisky said the woman did not have confidence in the Republic of Nauru hospital (RONH) to perform the biopsy safely.

“We are aware of multiple accounts that the RONH facilities are quite basic by Australian standards, and that general hygiene is a concern for refugees and asylum seekers who have attended RONH. The obvious solution is to have … [the refugee] assessed and a biopsy carried out in an appropriately resourced hospital in Australia.”

He said the woman was receiving a level of care “completely unacceptable in rural or metropolitan Australia”.

“Unfortunately, this case is only one of a multitude in which our government is falling far short of providing timely and adequate care to refugees and asylum seekers, due to political agendas.”

In response to questions from the Guardian, the department would not comment on the woman’s case specifically, but said in a statement:

“Due to unforeseen circumstances a medical transfer flight to Port Moresby scheduled for 4 August 2016 did not occur.

“The governments of Nauru and Australia are working with the government of Papua New Guinea to reschedule the transfer to Port Moresby for medical treatment as soon as possible.

“Persons scheduled for medical transfer will continue to receive medical treatment from the health services provider in Nauru.”

The department has consistently maintained that refugees and asylum seekers on Nauru and Manus Island have access to healthcare services “broadly comparable to those available within the Australian community”.

Meanwhile, on Australia’s other offshore detention island, Manus, refugees and asylum seekers held a late-night vigil for Pakistani refugee Kamil*, who drowned while swimming this week.

But refugees have also protested against plans by PNG authorities to bury the man on Manus Island. The detained refugees have said the man should be returned to his native Pakistan for burial, in accordance with his family’s wishes. They have even offered to sell their clothes and personal effects to fund the repatriation.

PNG authorities, after initially saying the man’s body could not be repatriated because it would cost too much, have agreed to meet with representatives of the refugees on Friday morning.

Australia funded the repatriation of two Iranian asylum seekers who died from injuries sustained while in detention on Manus: Reza Barati who was murdered by guards, and Hamid Kehazaei who died in a Brisbane hospital after his infection on Manus was inadequately treated.

However, a spokesman for the Department of Immigration and Border Protection said “funerary arrangements for refugees and transferees dying in Papua New Guinea are matters for the PNG government”.

“The department is aware that the PNG government has made contact with the deceased person’s next of kin and that local arrangements are being made for his burial.”

Iranian refugee Behrouz Boochani told the Guardian from inside the detention centre: “The Pakistani guys talked with Kamil’s family today and they do not agree to bury Kamil in Manus island. They want him sent back to Pakistan.

“This is incredible that immigration want to bury him by force and it is immoral and inhumane. The Australian government is responsible and must send his body to Pakistan.”

Uncertainty over the future of the Manus regime has led to unrest in the detention centre compounds.

A Rohingyan refugee currently held at East Lorengau was prevented from a second suicide attempt in as many days, when fellow refugees took petrol from him. It’s understood the man had requested to return home, but because Rohingya people are not recognised as citizens by his native Myanmar he is legally stateless and cannot be returned there.

• The Guardian has chosen to publish only the man’s first name, out of concern for his family in Pakistan. 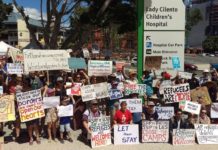 Baby Asha released from hospital, but may still return to offshore detention