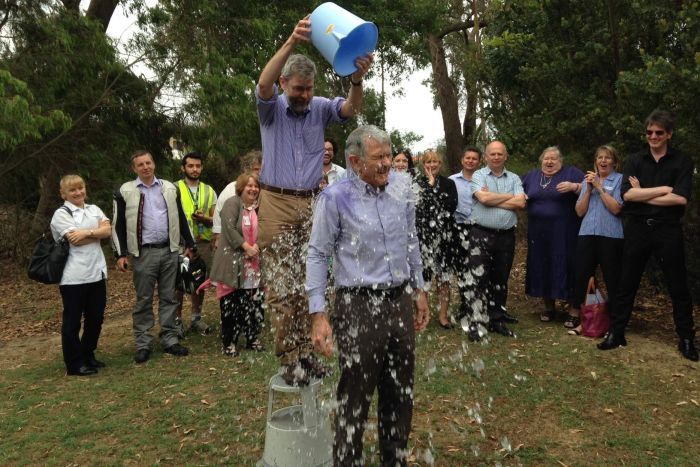 International scientists are thanking the ‘ice bucket challenge’ for helping them achieve a medical breakthrough by raising millions of dollars for research into motor neurone disease.

The ice bucket challenge began in 2014 and involved thousands of people around the world pouring ice-cold water over their heads and posting the videos on social media.

It didn’t take long before celebrities, politicians, and athletes jumped on the bandwagon.

But there was a serious side to the challenge — it was created to promote awareness of motor neurone disease.

And scientists say a bit of fun has unlocked some vital clues for people living with the disease, also known as ALS.

Dr Matthew Robinson, from the Brain Institute at the University of Queensland, said researchers had found three new genes that are involved in ALS.

“The hope is that as a result, we can better understand what these genes actually do,” he said.

“And then hopefully we can better understand the ways in which we can treat this disease in the future.”

The ice bucket challenge helped to raise more than $3 million for research in Australia, and hundreds of millions of dollars worldwide.

Dr Robinson said while people were critical of people dumping buckets of cold water over their heads, they did not necessarily understand what the challenge was about.

“Any way in which the public can get involved to generate money that can support either patient care or research is going to be beneficial,” he said.

New genes a pathway to discovery of what is going wrong

Dr Robinson travelled to Holland last year to take part in the research, a major project that involved 30,000 people worldwide.

John Landers, from the University of Massachusetts Medical School in the US, led the study and said it was a worldwide effort.

“There were 80 authors on this publication from 11 different countries and so all of them contributed and if we didn’t do this as one large group, this discovery wouldn’t have been identified,” he said.

He said finding the new genes was a crucial development in the global research effort to tackle motor neurone disease, which can affect basic bodily functions by attacking nerve cells.

“We don’t really have a good grasp on what is actually going wrong in ALS patients,” he said.

“But as we find more genes that seem to contribute to the disease itself, what it does is that it gives us what pathways may be going wrong in ALS patients and as a result, this can lead us to therapeutic treatments for ALS patients.”

Dr Robinson said the funding has also had a direct impact on research in Australia.

“Just over $1 million has been allocated to the Queensland Brain Institute, through the Motor Neurone Disease Research Institute of Australia.

“And the point of this grant is to collect samples all over Australia from all different neurological centres, and universities, and to collect data in a kind of uniform way.

“By collecting data in a uniform way, it means that we can better understand the symptoms, match people properly to their samples, and hopefully contribute towards the next round of efforts.

“Which will be gathering even more information, with the hope that we’ll find even more regions of the genome involved, and thus understand a bit more about the biology of this disease.”