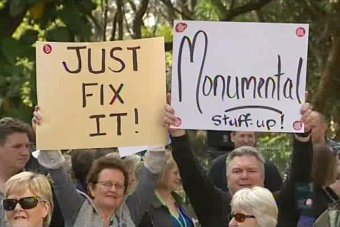 Efforts are continuing to recoup more than $62 million in overpayments to Queensland Health staff from the 2010 payroll debacle.

Thousands of staff were overpaid, underpaid or not paid at all under the payroll scheme ordered by the Bligh Labor government.

It has since cost taxpayers more than $1.2 billion but Queensland Health has not stopped attempting to recoup millions in overpayments.

“I am very aware that, in general, the issue of overpayments has been challenging and sensitive for many during recent years, particularly where the overpayment occurred through no fault of the individual,” he said in the letter.

“Queensland Health is committed to resolving all outstanding overpayments and loans, and we will escalate our efforts to recover these amounts, if needed.”

The letter then goes on to explain how to repay the funds via Bpay.

Queensland Health has recouped about $34.3 million in the past three years, leaving another $62.2 million yet to be collected.

A former Queensland Health worker who received the letter but did not want to be named said they were issued with an overdue bill of $1,400.

Opposition Health spokesman John-Paul Langbroek said 1,696 Queensland Health workers were overpaid each fortnight a total of $692,366, equating to about $18 million a year.

“Labor is going back to having door knocks on people – who may be currently working for Queensland Health and who are in dispute about an overpayment – [despite it being no] fault of their own,” he told Brisbane ABC 612.

Health Minister Cameron Dick said the overpayments were only a fraction of the total fortnightly pay run of $285 million.

Furthermore, 85 per cent of overpayments are recouped quickly.

“For an overwhelming majority of Queensland Health workers, there is a very short and simple process for recovering overpayments and it is done within three months,” he said.

Queensland Nurses Union secretary Beth Mohle said they had advised members since day one not to pay the Government money, unless it can prove the overpayment.

At that point it should be repaid.

“What needs to happen is individual case management,” she told 612 ABC Brisbane.

“Our members are heartedly sick and tired of this and just want the pain to end.

The Newman LNP government launched legal action against IBM in 2013 but the case was eventually dismissed by the Supreme Court earlier this year.

A 2013 inquiry found the system failure was partly the fault of public servants who failed to manage the project properly.