The head of Tasmania’s new streamlined health service has offered to retrain senior managers at the Royal Hobart Hospital in response to an email leaked to the ABC.

The email asks clinical staff to speed up the discharge process at Tasmania’s biggest public hospital to free up beds, as the Emergency Department is at capacity and the situation is “getting worse”.

It tells staff to “where possible” review what it terms “probable” and “potential” discharges.

Tasmanian Health Service chief executive Dr David Alcorn, a psychiatrist, said that was not the way the hospital did business, but he was not going on a “witch hunt” to find the person responsible for the memo.

“If this has been sent out by a RHH manager, my advice for them would be to go back and look at the hospital’s escalation plan which has been in situation for sometime now,” he said.

“And if people require retraining, we’re happy to give them retraining.”

The escalation plan was announced by Health Minister Michael Ferguson in April to address unacceptable waiting times in public emergency departments in Hobart and Launceston.

The plan is triggered when EDs are at capacity and Dr Alcorn said while the system is working, there is room for improvement.

“The hospital is actually performing just as I would expect under the RHH escalation plan,” he said.

“There are three levels – green, yellow and red – and the flows in and out of hospital are managed according to those levels.

“The RHH is about average in terms of length of stay performance.

“There are certainly other hospitals that are better at that that I have worked in.

“That is our aim through the Patients First plan – to improve the flows through the hospitals.

“That is not a criticism of our staff, it is just saying that we need to keep moving ahead along with the rest of the health system.”

Dr Alcorn took a swipe at both the nursing and doctors unions, which continue to demand more beds to ease the pressures.

“I think the AMA has got to take its role in participating to help solve this problem, and that involves getting right behind criterion-led discharge to enable our nurses and other senior non-medical leaders to be involved in getting people out of hospital in a very timely way,” he said.

Dr Alcorn said he wanted a word with the head of the Nursing and Midwifery Association, Neroli Ellis, who complained this week about elective surgery delays at the RHH.

“I think it’s a bit sad that the ANMF has come out with that position [when] we in Tasmania have completed a record number of surgeries in the last 12 months,” he said.

“For the ANMF to come out and complain about three elective surgeries after a record number of surgeries that have been completed, after years and years of elective surgery numbers not being delivered, I think is a bit rich.”

He said winter was always a stressful time for health professionals.

“I think it is important to realise that all managers and clinicians in the middle of winter right throughout Australia are working under fairly difficult circumstances,” he said.

Dr Alcorn has only been in the job since February, when he took over from interim chief executive Dr Anne Brand after leaving his role as executive director of the Royal Melbourne Hospital. 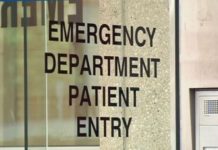