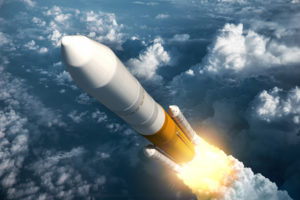 The alarming headlines are based on a study that found a 72% increase in metastatic disease cases (cancers that have spread beyond the prostate) between 2004 and 2013.

The reason for the stark rise? Here’s HealthDay’s take on the findings based on an interview with one of the study authors:

It’s possible that prostate cancer may be getting more aggressive, Schaeffer said, but statistics also show that fewer men are being screened. That’s the probable consequence of a 2012 recommendation by the U.S. Preventive Services Task Force that said men should not be screened for prostate-specific antigen (PSA). PSA, a protein produced by cells of the prostate gland, is often elevated in men with prostate cancer.

In other words, the increase in cancer is at least partly due to the Task Force’s recommendation to stop screening so aggressively with PSA tests, right?

That’s certainly one possibility, but the suggestion is coming from a researcher who admits to being a “true believer” in prostate cancer screening. He’s later quoted by HealthDay as saying:  “If you screen, you can reduce the number of men who present with metastatic cancer, that’s what I believe.”

In a Philadelphia Inquirer story on the same study the researcher ominously intones, “This is going to affect mortality rates. Metastatic disease is incurable. They will die.”

Now if you’re wondering what someone who isn’t necessarily a “believer” in screening would have said, you won’t find that perspective in HealthDay’s story or stories from UPI or Newsweek — none of which included analysis of the study from an independent expert.

The American Cancer Society reacted quickly with a response from Chief Medical Officer Otis W. Brawley, MD. He pointed out that the “surging” wave of prostate cancer is based on raw numbers of cases, not an increase in the rate of disease (number of cases per number of people). And that’s problematic for obvious reasons, according to Brawley:

Epidemiologists learned long ago that you can’t simply look at raw numbers. A rising the number of cases can be due simply to a growing and aging population among other factors. In addition, in this study, the rise they detected began before USPSTF guidelines for screening changed. There may or may not be a rise in the rates of metastatic disease; but because of a flawed analysis, this study does not answer that important question.

Here’s another way to think about it: Imagine a baby boom that might similarly lead to “skyrocketing” cases of childhood disease. While the rise might seem alarming on its face, the real culprit might simply be an increase in the childhood population at risk of getting those diseases. It’s only by looking at the rate of disease that you can tell whether the percentage of children with disease is increasing and whether the increase merits action.

Given this substantial flaw, why did so many news outlets blast off on the “skyrocketing” disease angle? Brawley notes that the framing bears a suspicious resemblance to that of a Northwestern University news release, which just happens to be home base for that “believer” in prostate cancer screening. 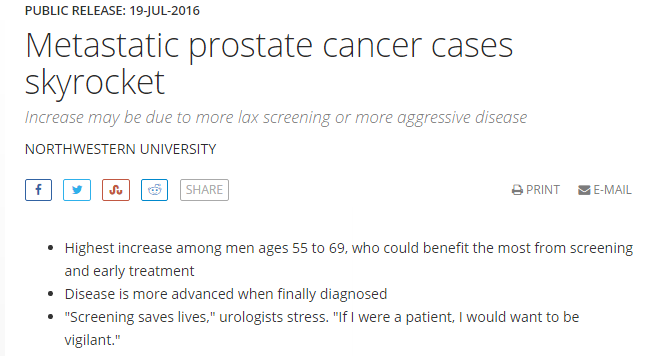 Whether reduction in PSA screening will lead to more cases of advanced prostate cancer is a legitimate research question that scientists urgently need to address. But as Brawley points out, sensational news releases that trumpet weak study results won’t get us any closer to answers. He adds: “We hope reporters understand that and use this study to ask another important question: can we allow ourselves to be seriously misled by active promotion of flawed data on important health matters?” 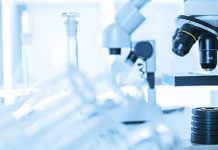