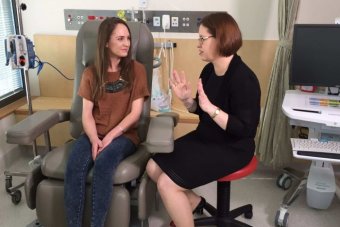 A new treatment proving more successful than chemotherapy in treating melanoma could also be used to treat other cancers.

Clinical trials have shown the drug Keytruda reduced or eliminated the disease in almost 50 per cent of patients with advanced melanoma.

The drug essentially replaces chemotherapy and has been placed on the pharmaceutical benefits scheme, which means if melanoma patients meet certain criteria, they will be treated for free.

But the next step will be making it accessible for other cancer patients.

Kathy Gardiner, who was diagnosed with terminal stage 4 melanoma, said she already had radiotherapy and several operations when she received compassionate access to the Keytruda trial.

More than two and half years later, she remains free of melanoma and no longer receives treatment.

“It’s amazing to be one of the patients to have no evidence disease response,” she said.

“It’s also very heartbreaking to know there are other patients out there who haven’t had that same response.”

Ms Gardiner’s doctor, Victoria Atkinson, a medical oncologist at Princess Alexandra Hospital in Brisbane, said it was the first time a drug had significantly improved the survival rate of patients with advanced melanoma, which used to be a terminal prognosis.

“The average survival for patients with melanoma up until 2010 was nine months [all stages].”

“Published results have shown that 55 per cent of patients on Keynote-006, which was the pivotal trial, were alive at two years.

“So it was very encouraging to see response rates in the order of about 40 per cent — so that means 40 per cent of patients will have a shrinkage of their tumour.”

Dr Atkinson said this meant there are patients who are currently free of melanoma and some who no longer need treatment, a “significant leap from chemotherapy”.

“We used to use it because we didn’t have anything else, but it has a shrinkage rate of about 10 per cent and median survival, so how long patients live is nine months.”

Unlike chemotherapy, which kills the good cells as well as the cancer, Keytruda stimulates the body’s immune system to kill the cancer cells.

Progress in melanoma treatment now means doctors are daring to talk about a cure.

“As a medical oncologist I don’t say the word cure very lightly because that’s something certainly for a very long time that we have not been able to think about,” Dr Atkinson said.

“But I think in the years to come, potentially immunotherapy is how we’re going to be talking about that.”

Hope to apply drug to other forms of cancer

Dr Atkinson said she hoped it could be applied to other cancers.

“If we look at the immune therapies for the other malignancies the response rates are less, but it’s still better than some of the forms of chemotherapy that we use,” she said.

Professor Georgina Long, a medical oncologist at Melanoma Institute Australia who runs a range of clinical trials, said the drugs had an “excellent toxicity side-effect profile”.

“Patients don’t lose their hair, most of my patients are back to work full time, leading normal lives,” she said.

“They’ll often come in, and say ‘people always ask me how I’m going, I’ve got bad melanoma, but I feel great, I’m living a normal life, I feel like I’m lying to the system.’

“And that just shows you the success of the drug.”

Professor Long pointed out that the treatment was still new, with trials starting less than five years ago, so they did not yet have long-term data.