US Vice President Joe Biden has arrived in Melbourne for the official opening of the $1 billion Victorian Comprehensive Cancer Centre, before heading to the MCG on the first leg of his visit to Australia.

Mr Biden flew to the city on Saturday night amid tight security, and was welcomed by Victorian Premier Daniel Andrews before being whisked away to a city hotel.

The new cancer centre combines Victoria’s leading cancer research, education and training facilities and is said to be one of the best in the world.

The Vice President is the chairman of the National Cancer Moonshot Initiative, which aims to accelerate cancer research in the United States.

The issue is one close to his heart after losing his 46-year-old son Beau to brain cancer last year.

He will meet with World War II veterans and attend a flag presentation at the MCG, before settling in to watch the match between Carlton and West Coast.

On Monday he will tour the Boeing factory in Melbourne before flying to Sydney, where he is expected to meet with Prime Minister Malcolm Turnbull. 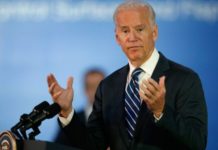 NSW Government to collaborate with United States on cancer research