Home Crime, Law and Justice Insurer tells family saving daughter’s life is ‘elective surgery’
Share on Facebook
Tweet on Twitter
Elise Anderson has just turned one and was, mercifully, out of hospital to celebrate. Her short little life has been plagued with medical dramas and surgery – and her parents, Glenn and Anthea, have recently learned her liver is beyond repair and she needs a new one.

Which Glenn is happy to give her. The procedure involves taking part of his adult liver to become Elise’s tiny replacement organ and means she doesn’t have to join the long liver-transplant waiting list. 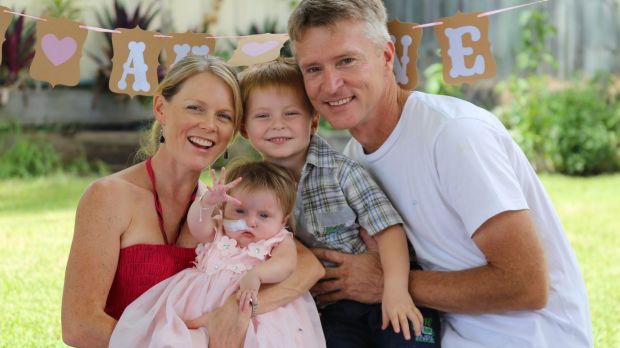 Glenn and Anthea Anderson and their son Lucas, 3, celebrating the first birthday of daughter Elise at their home on the Sunshine Coast of Queensland. Photo: SuppliedFor his gorgeous girl, he sees no choice in the matter.

But his income-protection insurer does. “The elective surgery benefit is a non-super benefit so unfortunately it will not apply to this policy,” product representatives of the Asteron Life insurance policy told the Andersons via email.

The thing is, your insurer considers live organ donation “elective” too. You’ll need a magnifying glass for the fine print, but they all do.

“I feel like I’ve asked the insurance company for a million dollars, not approximately eight weeks part-pay out of a possible 12 weeks off work to save my daughter’s life,” says Glenn, who works as a mechanic and has a one-month waiting period on the policy he holds within his superannuation fund.

Income-protection insurance is designed to replace up to 75 per cent of your income if you are unable to work through accident or illness. When the rules changed in 2007 to allow payments from insurance held in superannuation to continue until age 65, rather than for just two years, it became popular to take it out through funds.

The appeal is that insurance in super is usually much cheaper because it is issued on a group basis rather than via individual risk-assessment – called underwriting. And it helps that the premiums come out of your super not your pocket.

That’s all fine until you realise elective surgery is rarely included in insurance in super. Remember, live donation is “elective”.

So you’re probably thinking the Andersons should just transfer Glenn’s insurance to outside their super fund (and hope Elise’s situation doesn’t become critical within the six-month waiting period)… but you’d be wrong. Asteron has also cynically closed that door.

“Unfortunately to move this policy from super to self-owned, Mr Anderson will need to go through full underwriting and the operation will be excluded,” an Asteron representative informed in a subsequent email.

For the rest of us, it’s prudent to look at ditching income protection within super immediately. Or, as many advisers are recommending to clients, retaining it for the cash-flow benefits but also starting a linked top-up policy outside of super for the excluded benefits.

One leading insurer has quietly told me that 50 per cent of its policies are now held within super. Meanwhile, in 2014, the rules for super funds allowing payments out from such insurance were tightened (to meet a “condition of release” and not breach a “sole purpose test”) – and that comprehensively counted out elective surgery.

Life-saving organ donation has been unintentionally swept away along with lifestyle stuff like boob jobs.

And that’s the real injustice: that becoming a live donor could be considered “elective” in the first place. In what universe is saving a family member’s life by donating a part of your liver, or a kidney, something about which most of us would think twice?

Elise’s parents, the Andersons, are a single-income family; they could potentially lose it all for three months.

The co-founder of support group Liver Kids, Claire Matthews, believes this financial slug would have a significant impact while two family members are recovering from major surgery and a third cares for them and a toddler. “What’s meant to happen in that time?”

Michael D’Apice, managing director of a broker that specialises in claims advocacy, Austbrokers Financial Solutions, says: “If an insurance company doesn’t have the moral backbone to look at this as an individual situation, then they’re not standing on a high moral ground, let’s just say.”

Worryingly, he adds: “We are now seeing so much push back from insurance companies; so many times the default is to just deny the claim.”

If insurers want customers to keep the faith with insurance, and keep paying astronomical premiums, they need to start acting with conscience not contempt. (Particularly in light of recent allegations about CommInsure deliberately avoiding payouts.)

No, fraud is not OK and, yes, terms and conditions need to be observed, but only to the extent that the spirit of insurance – to protect people in the event of the worst happening – is honoured.

Indeed, the chairman of regulator ASIC, Greg Medcraft, said as much in a recent speech to providers: “If you don’t care about the regulator, you’d better care about the crowd, because they’re getting stronger and stronger. There has been a shift of power.”

A “legal licence”, he warned, now needs to be supplemented with a “social licence”.

“Principles-based approaches are the only way of the future, and you’ve got to allow that flexibility because the law cannot keep up otherwise,” he added.

It couldn’t be more relevant to the Andersons. Given their extenuating  circumstances  the super trustees are apparently open to allowing a payment.

And I believe Asteron is now considering giving one. After being contacted for this story, the insurer stated: “We are talking to Mr Anderson and his adviser to assist him and his family about this matter.”

C’mon, Asteron do the right thing. Set the example for the rest.

“There are a number of elements of an income protection insurance policy that are only available to people who have their policy outside their superannuation. These are clearly labelled in the policy document.

“Deciding whether or not to place your income protection and other forms of insurance with your superannuation should be done in consultation with a financial advisor as it has both tax and policy implications.

“Customers can generally elect to move their Asteron insurance policy in or out of their superannuation without disruption, as is their preference. They cannot move if they have an active claim or are eligible to make a claim.

“We are talking to Mr Anderson and his adviser to  assist him and his family about this matter.” 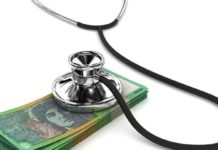 Is this proof private health insurance is a rip off? 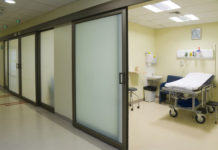 The debate we’re yet to have about private health insurance