Traces of asbestos have been found in roof panels at the new Perth Children’s Hospital, the West Australian Government has confirmed.

It comes after the Construction Forestry Mining and Energy Union (CFMEU) warned hundreds of workers at the hospital in the suburb of Nedlands may have been exposed to white asbestos.

The CFMEU said on Wednesday it had conducted its own tests, and found levels of asbestos considered unsafe.

Health Minister John Day confirmed asbestos had been found after a controlled test was conducted.

The tests were sparked after a worker at the construction site cut into a sealed roof panel earlier this week and made a suspicious discovery.

There are 150 of the roof panels in question on the 8th floor of the building, which lead contractor John Holland had independently tested in 2013, and found to be asbestos free.

It was revealed on Tuesday an urgent check had been carried out at the new Royal Adelaide Hospital after the discovery of an asbestos-tainted building product in a Brisbane office tower.

However the checks revealed the suspect gaskets used in Brisbane by Yuanda Australia had not been used on the Adelaide hospital.

Asbestos imports to Australia have been banned for more than a decade. 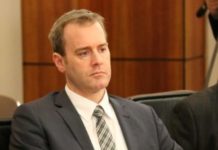 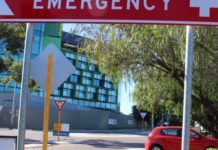