THE Queensland Government will adopt every recommendation made in a scathing report on how black lung was allowed to re-emerge in the state without detection.

Eleven workers have confirmed cases of black lung and a further 18 have shown signs after their X-rays were reviewed in the United States. 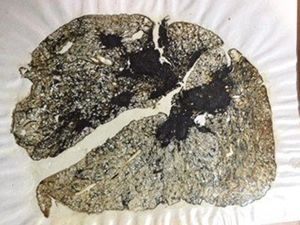 The disease was believed to be eradicated from Queensland about 30 years ago until November 2015 when a confirmed case was reported.

“I don’t think any one person or group is at fault for this,” he said. “Everyone has been at fault”.

It said there had been “clear deficiencies” in the overall process of detecting black lung.

Dr Lynham said the government would implement all 17 of the report’s recommendations and would be calling for a nationwide coal dust limit.

Coal companies said workers will be able to have recent X-rays reviewed under new standards or, if they have not had an X-ray in two years, have a new scan taken for review.

Black lung miner told he was “healthy” before diagnosis

A FORMER coal miner has spoken about the trauma of discovering he had black lung disease for nine years despite being given a clean bill of health by medical experts.

“Angry at the mining industry, at the doctors that just let this slip by and the radiologists that weren’t checking for what they were supposed to be checking for.”

Mining Minister Dr Anthony Lynham will front the media this morning about the issue.

The State Government is expected to release a review, headed by Monash University’s Professor Malcolm Sim, into the scheme this week.

Eleven coal miners have received a black lung diagnosis in the past year despite the disease supposedly being wiped out 20 years ago.

According to the ABC, its leaked copy of the review identified “major system failure at virtually all levels”.

The review also reportedly recommended a major overhaul of the system.

Pneumoconiosis is caused by ongoing exposure to coal dust and there is no cure.

It is called black lung because it turns the normally healthy pink organ black.