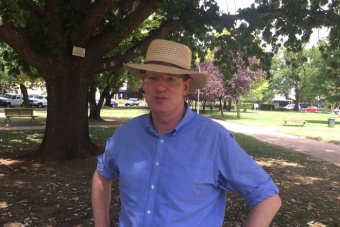 Charles Sturt University (CSU)says it hopes a push for the proposed Murray Darling Medical School will gain momentum, with a new Nationals MP set to enter parliament pledging to make it his top priority.

The Charles Sturt and La Trobe universities have long been lobbying for the school, which would have campuses at Orange, Wagga Wagga and Bendigo, and would aim to address rural doctor shortages.

Both universities expressed dismay in the lead-up to the federal election after the Coalition announced $32.5 million to fund the Central Coast Medical School in Gosford.

Independent senator Nick Xenophon used a visit to Orange in central-west New South Wales in May to criticise the Government for not committing money to the Murray Darling Medical School.

Former state Member for Orange Andrew Gee has this week made the switch to federal politics, after being elected to the local seat of Calare.

Mr Gee said his first order of business as a federal MP was to secure funding for the regional medical school.

“It’s unfinished business, basically. It’s something the Nationals have supported in the past, and I think we’ve got to make that a priority,” Mr Gee said.

“I’ve always been a big supporter of the medical school for Charles Sturt University. In fact, when I came into state parliament in 2011, I mentioned it in my inaugural speech as something we want to see for the region.

CSU vice-chancellor Professor Andrew Vann said he was optimistic about having a new advocate for the project in Parliament.

“We were certainly disappointed that the funding for the Gosford school was announced through the election campaign, but very pleased to see Andrew Gee’s support on being elected and to hear that it’s a top priority for him,” Professor Vann said.

“We’ll be looking to again work with the Nationals and the Coalition, assuming they form government that is, to get it over the line.”

Professor Vann said the Wagga-based Riverina MP Michael McCormack had also long been an advocate of the project, and that the growing support among politicians was encouraging.

“It’s obviously going to be a bit of a turbulent time in politics. We just want to make sure the needs of our community are heard,” he said.

Meanwhile, there is cautious optimism regional universities will fare better under the next term of government as full fee deregulation remains off the table.

The Federal Government abandoned the controversial plan before the election, but is still forecasting $2 billion in savings from the sector.

Professor Vann said whoever formed government needed to recognise the need to invest in regional universities.

“I imagine the Senate’s not going to be easy to deal with, so I imagine controversial legislation will be difficult to get through,” he said.

“I’d be surprised if we’d see fee deregulation come up again, but the budget estimates for the Coalition still have $2 million worth of cuts for higher education locked in, so we’ll be putting our advocacy to try and make sure that the voice of regional universities is heard in that.”

Medical school funding a ‘slap in the face’: Xenophon team

Rural patients waiting up to eight weeks to see a GP