Perth quintuplet mum Kimberly Tucci and her five five-month-olds have become the latest high-profile supporters of the Light For Riley foundation – and triggered Facebook debate in the process.

Ms Tucci became an online sensation after she became pregnant with quintuplets in 2015, and she now documents her journey on her Facebook page “Surprised By Five”. 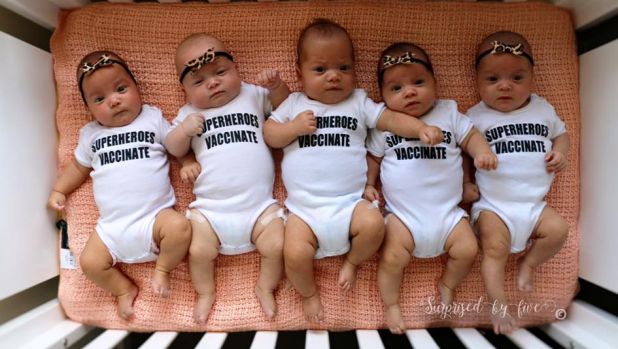 The quintuplets after their four month vaccinations.  Photo: Surprised By Five

She posted a photo of her brood – son Keith and daughters Ali, Penelope, Tiffany and Beatrix – dressed in “superhero, vaccinate” rompers to her Facebook page to support the Light For Riley foundation.

Light For Riley was established by Greg and Catherine Hughes after their four-week-old son Riley died from whooping cough in March 2015.

The Light for Riley foundation is dedicated to educating parents about the need to vaccinate infants to prevent whooping cough.

Ms Tucci’s post was inundated with more than 600 comments – many supportive but not all of them, as some Facebook users took the opportunity to engage in pro/anti vaccination debate.

“Thank you for supporting Light for Riley and sharing a positive vaccine experience. It’s so important to spread the word as vaccine rates are dropping. Your little ones are adorable,” one post stated.

“Cute babies. I pray you don’t have your hands full of sickly children one day. Look up the risks of vaccines,” another read.

“I’m against vaccinating but these are not my children. No one had the right to judge. Your doing what you believe is best for your wee ones ! Keep up the good work!” another reader commented.

A report revealed almost 10,400 children in WA were not fully immunised against contagious diseases in 2015. 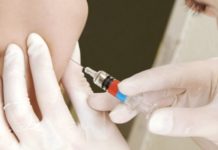 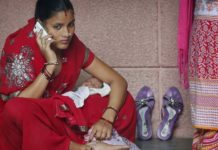 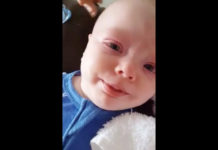