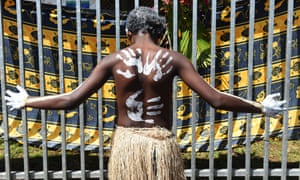 The gulf in cancer survival rates between Indigenous and non-Indigenous patients in Queensland has not changed from two decades ago, despite improvements for both groups, according to new research.

A study tracking survival rates five years after diagnosis from 1997 through to 2012 found little evidence of that gap closing, even with 10% more Indigenous patients likely to survive by the end of that period.

The study by Cancer Council Queensland, Menzies school of health research and Queensland Health is the first to examine the impact of the disparity statewide and over time.

Its findings, based on the cases of 214,000 cancer patients aged 20 to 89, will prompt further work by health authorities on how to better engage Indigenous patients with services and treatment.

But a Cancer Council Queensland spokeswoman, Katie Clift, said there was “no significant evidence” of the disparity lessening.

“Tragically, the study found about 20% of the cancer deaths among Indigenous cancer patients can still be attributed to the survival disparity and this value has not reduced over time,” she said.

“A better understanding at a population level of what is driving poorer survival and avoidable deaths will help to inform the collaborative development of targeted interventions, respecting principles of self-determination and engaging in meaningful dialogue with the Indigenous community.”

“It’s important that Indigenous Australians are aware of and engaged in these services,” Garvey said.

Michael Walsh, the director-general of Queensland Health, said any rise in survival rates was encouraging but more work was needed to close the gap in health outcomes.

Specific initiatives in Queensland included improving “early diagnosis, treatment and management of the diseases and conditions that together contribute to 80% of the health gap”.

Queensland Health aims to raise the average life-expectancy among Indigenous men by 4.8 years and women by 5.1 years by 2026.

The study is published in Cancer Epidemiology