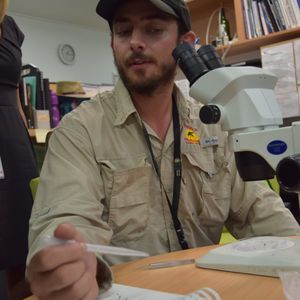 UPDATE FRIDAY 3.40PM: A ZIKA outbreak in Mackay would be very unlikely given public health crews have not located any of the types of the mosquitos that carry the virus, despite a man testing positive for the virus in South Mackay yesterday.

Only one adult mosquito was found in all the traps combined.

But Mr Jones warned rain overnight could increase mosquito populations and urged the public to empty and wipe out any containers holding water.

And he said during the surveillance of about 100 homes neighbouring the infected man’s home, 15 mosquito breeding sites had been identified.

However, he said the rain would have no impact on mosquito spraying.

UPDATE 3.40PM: : PUBLIC health crews have rushed to eliminate mosquitos from area surrounding the home of a man who tested positive for Zika virus after returning from Mexico.

Acting director of Mackay public health unit Andrew Jones said two vector control officers from Townsville and two Mackay health officers had gone door-to-door this afternoon around the neighbourhood trying to determine whether the only type of mosquito that can carry Zika, Aedes Aegypti, was present.

The crews put out mosquito traps, sprayed and gave advice to residents at about 100 homes within a 200m radius, close to Napier Street, of the infected mans’ residence.

But Mr Jones said even if one of these mosquitos had come into contact with the man, it would take 10 days before the virus would establish in the mosquito and it could be transmitted.

That’s why he said the crews were acting now, to try and “eliminate any possibility up front before we get into that time frame where there is the possibility”.

“I think we’re in a fortunate situation where we don’t have a lot of the Aedes Aegypti mosquito, which is the only vector on mainland Australia that carries it,” Mr Jones said.

“There’s not a lot of cause for concern at this stage.”

He called on the public to “take ownership of their backyards” and empty out any water-carrying containers where mosquitoes could breed, to try and eliminate the mosquito locally for good.

“If we get rid on the mosquito and don’t have it locally, we won’t have local transmission,” he said.

Despite the proliferation of Zika around the world, Mr Jones said while there would be future cases of residents with Zika, there was a low chance of ongoing spread.

THE Mackay Public Health Unit will assess an area in South Mackay today following the diagnosis of Zika virus in a man recently returned from Mexico.

Director of Public Health Dr Richard Gair stressed there was no immediate risk of anyone else contracting the virus.

“This afternoon we will assess an area in South Mackay to establish if there are populations of Aedes aegypti – the mosquito that could transmit Zika,” Dr Gair said.

“We will assess the risk of mosquitos transmitting the virus and will provide further advice to the public once we have done a physical inspection of the area near the man’s home,” he said.

The man contracted the virus while holiday in Mexico and was diagnosed after visiting his GP.

He remains at home, and while unwell, does not need hospital treatment.

Zika virus is closely related to dengue. The illness is usually milder, but complications may include birth defects in pregnant women.

HOW TO: Spray around your home for Zika and Dengue mozzies

Dr Gair said it was important people did not panic as there had never been a case of locally acquired Zika virus in Australia.

“Zika can be spread by one type of mosquito which lives only around buildings and breeds in fresh water containers. If the mosquito bites a sick person, it could catch Zika virus and, after about a week, be able to spread it by biting other people,” Dr Gair said.

A mosquito control team from Townsville will travel to Mackay to help with the inspection.

Mackay residents are encouraged to take general mosquito control measures such as removing fresh water containers, which provide breeding sites for mosquitoes, from around their homes.

ZIKA VIRUS: Other cases in Qld and NSW

Tip out or remove anything holding water in your yard.

To kill the mosquitoes which live in your home, the best way to do this is to spray in and around your home in dark hiding places with an ordinary surface or cockroach insect spray.