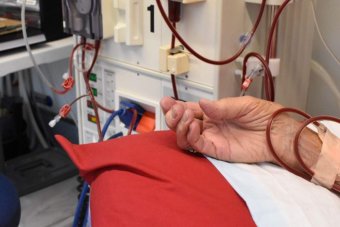 New South Wales has the highest rate of adults living with signs of chronic kidney disease in Australia, a new report has found.

Kidney Health Australia‘s annual State of the Nation report said the Illawarra and Shoalhaven regions on the NSW south coast ranked number one on the list of worst-affected areas.

The report said 45,000 people or 19.5 per cent of the adult population in that area were living with signs of the disease.

Sydney’s Inner West was second on the list, with about 16.7 per cent of the area’s adult population showing signs of the chronic disease.

“We have 60 Australians dying every day from kidney-related disease — that’s one person every 25 minutes,” she said.

Ms Wilson said the report’s results could help build a greater insight into the areas that needed the most education, awareness and health services.

Treatment of kidney disease is costs the nation more than $4 billion every year, according to the report.

In light of the report, Ms Wilson has called on the incoming federal government to fund an integrated health check for GPs to help boost rates of early detection as well as reduce the amount kidney treatment is costing the health system.

“We need better early detection of kidney disease through the implementation of an integrated health check, we need a national approach to dialysis, we need to increase living organ donation,” Ms Wilson said

The State of the Nation report also found the gap in Indigenous kidney health remained critical, with 59,000 Aboriginal and Torres Strait Islanders living with signs of chronic kidney disease — making Indigenous Australians more than twice as likely to have signs of kidney failure than non-Indigenous people.

“We need a national taskforce to tackle the devastating rate of kidney disease in Aboriginal and Torres Strait Islander communities,” Ms Wilson said.

The release of the report coincides with Kidney Health Week that begins today until May 28.