Malcolm Turnbull has been in clean-up mode again with Sussan Ley revealing she wants to remove the Medicare rebate freeze but isn’t allowed to because the Finance and Treasury departments say no.

Labor has pledged to lift the freeze from next January if elected, which is expected to cost $2.4 billion over the first four years, the most expensive spending commitment of the election campaign yet.

Doctors have said they had understood that the freeze would be lifted, rather than extended, at this year’s budget. The Royal Australian College of General Practitioners and the Australian Medical Association (AMA) have both launched public campaigns against the extended freeze, warning this would force more doctors to charge patients a co-payment, rather than bulk-billing them. 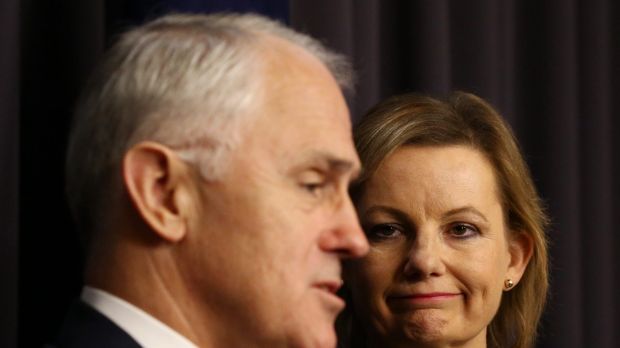 Prime Minister Malcolm Turnbull and Health Minister Sussan Ley. Photo: Andrew MearesMs Ley, who has previously criticised doctors for not offering to “assist taxpayers” while reforms to primary health care were under way, told ABC on Monday: “I understand for doctors that the GP freeze has been difficult and I appreciate they’re working with us.

“I’ve said to doctors I want that freeze lifted as soon as possible but I appreciate that Finance and Treasury aren’t allowing me to do it just yet.”

She would not say whether the extended freeze would cause bulk-billing rates – currently at their highest ever level – to fall, but was skeptical that doctors might charge $20 per consultation to make up what she said was a 60-cent loss. 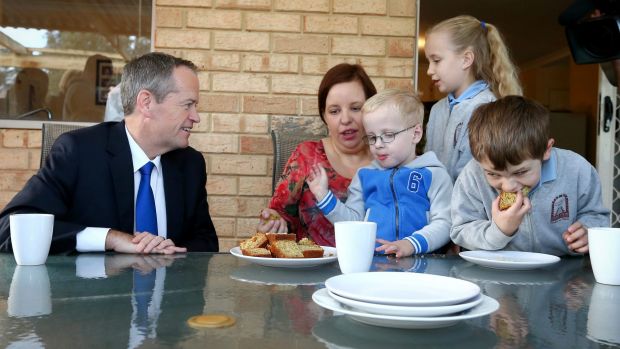 Opposition Leader Bill Shorten spruiked Labor’s health policy at morning tea with Natalie Clarke and her children Zac, Caitlin and Jacob in the WA seat of Hasluck. Photo: Alex EllinghausenLabor capitalised on Ms Ley’s remarks, with leader Bill Shorten saying they showed the Coalition was divided on health and that the minister had “been rolled by other people in the government.”

Prime Minister Malcolm Turnbull said that the freeze would end “at some point. The question is, it will end when we judge it is affordable within the context of the health budget. That’s all Sussan is saying. It’s common sense.”

Mr Turnbull said savings from the freeze on Medicare rebates had allowed the government to subsidise more “life-saving drugs” for Australians. Budget papers say the savings from the extended freeze would be “redirected … to fund health policy priorities.”

“As a government we’ve decided you have to live within your means. So when we increased the allowances and things for the PBS, for cancer treatment or things like that, or when we commit an additional $2.9 billion to hospitals, all of this has to be paid for and the difference between the government and the Labor Party is, all of our spending in this election is paid for by savings, not by higher taxes,” he said.

Shadow health spokeswoman Catherine King said Ms Ley had indicated the lack of influence she had in cabinet on health policy. “She has basically admitted that health policy under the Turnbull government is all about cuts and about finding savings, it has got nothing to do with the health of this nation.”

Ms Ley rejected Mr Shorten’s claim that the election was a referendum on Medicare, saying it was a contest between which party could produce more jobs for voters and their children.

AMA president Professor Brian Owler said the effects of the latest freeze were yet to be felt but that the two-year extension has sent “a signal (that doctors) can’t absorb the freeze over that period.”

Professor Owler estimated that doctors who abandoned bulk-billing as a result, would charge patients a co-payment between $15 and $20.

While the lost 60 cents in indexation “doesn’t sound like a lot…if you’re seeing thousands of patients a year, it adds up,” he said. “For a GP seeing 30 patients a day, it’s a lot of money out of the practice and the indexation compounds (over time).”

Those who stopped bulk-billing to charge co-payments would also lose $10 bulk-billing incentives for each consultation.

The Prime Minister and Health Minister have also differed slightly on the issue of the Coalition’s plan for the cost of prescription medicines.

Labor has promised to officially scrap the failed plan for a one-off rise to PBS co-payments, and not to increase them beyond inflation, which is expected to cost $3.6 billion over a decade. The Coalition shelved the rise after it failed to get Senate support but it was still included in budget papers.

Mr Turnbull re-committed to the rise on Sunday, while Ms Ley was less enthusiastic, saying they would re-consider it after the election.

Pressed on the policy on Monday, Ms Ley told the ABC it was still “on the table” provided it could be passed: “I’m supportive of a sustainable PBS and I think it was a very sensible measure in that direction but when we have a new Senate we will talk with them about how they might pass this measure.”