Another two cases of legionnaires’ disease have been reported in central Sydney, bringing the total number of patients to five in the current outbreak.

Both of the new cases are men who were in the CBD at about the same time as three people who were diagnosed last week.

A woman in her 30s remains in a critical condition in hospital.

The latest outbreak is believed to have happened between April 20 and 29.

NSW Health communicable diseases director Vicky Sheppeard said the bacteria that causes the disease had been found in five cooling towers in the CBD, and they had been disinfected.

“Our teams have now inspected and tested all buildings in the area that all cases were exposed,” Dr Sheppeard said.

She said there was no ongoing risk but the investigation was continuing.

“At no stage have we said people should be fearful, very often the tower that’s caused the illness has been cleaned before an outbreak comes to our attention,” she said.

“So we’re not aware of any ongoing risk, but it’s more that people who were in the city at that time when the exposures occurred are aware of the symptoms and know to seek medical attention if they do become unwell.”

People can be exposed to the bacteria when a water cooling tower — which are often located on the roof of a building — emits contaminated water vapour into the air that can then drift down onto the outside street.

An earlier outbreak of legionnaires’ in March claimed the life of a man in his 80s, while seven other people made a full recovery. 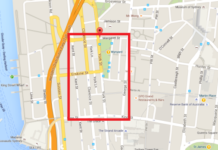