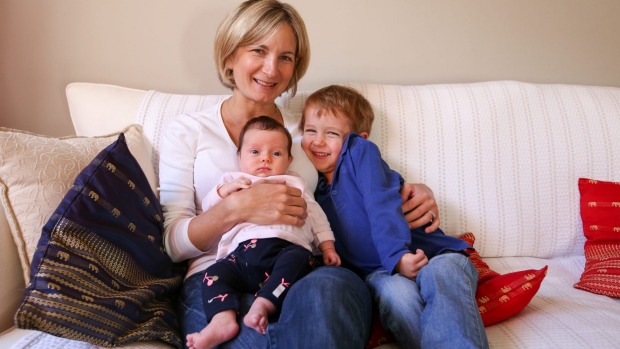 Karelle Leroy rarely takes time off work when she is unwell because she needs to reserve her 10 annual sick days to care for her two young children when they fall ill.

The human resources business partner from Randwick works five days a week from 8am to 5pm while another 30 hours a week are spent doing household work and caring for children.

“I rarely take sick days,” she says. “I generally take them for my eldest.

“I’ve had to take annual leave days because I didn’t have enough sick days left.”

Ms Leroy, 36, who shares child-care responsibilities with her husband, who is an actuary, said she did a lot of marathon running before having children.

“I don’t do any running any more,” she said. “Their health comes first and I come second.”

New research has found that Australian mothers work longer hours than the average CEO and put their family’s health before their own.

The study of 1009 women with one or more children under the age of 17 found more than one-third had not taken a sick day off work when they were ill. But 70 per cent said they had taken time off work to care for sick children.

The study, conducted in March by the Online Research Unit on behalf of the Cenovis Women’s Health Index, found Australian mums were working up to 80 hours a week in paid employment and running their household.

This was more than the 58 hours a week some CEOs worked, according to a 2015 study by US study business data platform, Domo.

The Australian research found 34 per cent of the mothers surveyed pretend to be fine when they are ill. Only one in 20 said they take the necessary time for rest and recuperation.

The study found almost half the women have gone to work sick because they had exhausted their leave entitlements caring for children.

Nutritionist Kate Freeman said almost two-thirds of the women surveyed felt overwhelmed when they were sick, yet preferred to remain the main carer for their children instead of getting help.

“There is a lot of pressure for mums to ‘keep up appearances’, whether it’s juggling a career with motherhood, or keeping the family household running smoothly,” Ms Freeman said. “Unsurprisingly, guilt plays a big part in this.”

“As a mother, we often become so focused on keeping our kids healthy and happy that we overlook our own needs.”