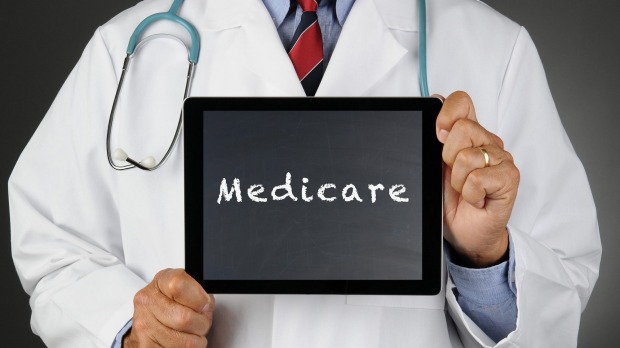 Unhappy: Doctors will launch a protest against the Turnbull government’s freezing of Medicare rebates for general practitioners.

The federal Coalition is facing an early election headache with thousands of GPs set to urge their patients to lobby against the extended freeze on Medicare rebates.

The Royal Australian College of General Practitioners will launch its campaign against the government’s decision to continue to freeze current rebates until 2019/20, which it says will force more doctors to start charging their patients a co-payment. The government expects the move will save it about $925.3 million.

From Monday, the 32,000 members will hang posters in their waiting rooms that warn: “Danger. You and your family’s health is being targeted. The extended freeze on Medicare rebates means you will pay more!”

As the federal election campaign kicks off, doctors will also encourage patients to demand that their local state and federal MPs support greater funding for Medicare, and to use social media networks to spread the message.

“The RACGP wants this campaign to reveal which candidates are publicly committed to protecting Medicare, and which ones aren’t,” president of the College, Dr Frank Jones, said. “We want them to pledge their support for an adequately funded world-class health system, including an immediate lift of the freeze.”

Despite the freeze being introduced almost two years ago, bulk-billing rates are growing and currently at their highest ever level at 84 per cent. This means most doctors are accepting Medicare item fees as payment with no extra charge to their patients.

Department of Health officials told senate estimates on Friday it was “very difficult to predict” how bulk-billing rates would change as a result of the extended freeze. GPs might accept a cut in their incomes, see more patients or shift toward more expensive Medicare items, they said. 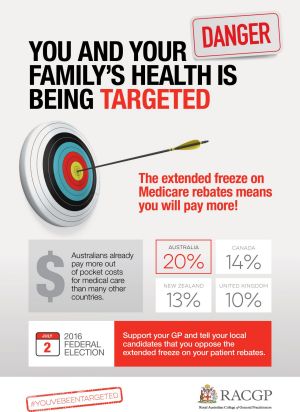 The College conducted a similar campaign in 2014 against the Abbott government’s unpopular and unsuccessful attempt to introduce a $7 GP co-payment.

The freeze, which the Australian Medical Association previously labelled a “co-payment by stealth”, felt like “deja-vu”, Dr Jones said, because doctors felt forced to charge patients for services to cover rising costs and stay in business. 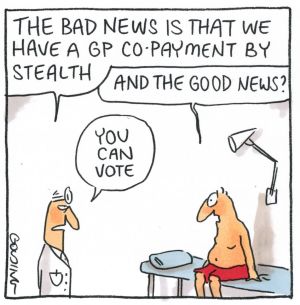 Some could even be tempted to ask patients with multiple problems to come back for extra sessions, to reap additional payments and “to keep their head above water,” he said.

Health Minister Sussan Ley has said it was “disappointing” that given the government’s commitment to a trial to reform primary care through Health Care Homes, “there’s no reciprocal offer to assist taxpayers with the immediate financial challenges our budget faces while it’s implemented”.

The campaign follows the pathology sector’s similar attempt to engage patients in a petition against planned cuts to bulk-billing, which are expected to take effect from July 1. Labor and the Greens are not expected to be able to disallow the regulation until after the election.