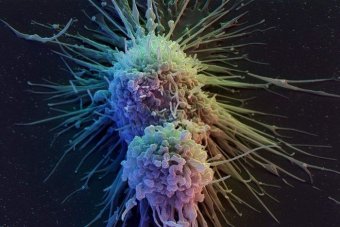 Photo: Researchers say the method could eliminate the need for chemotherapy. (Supplied)

Starving cancer cells of nutrients can reduce their growth by up to 96 per cent, researchers at the Australian National University (ANU) have discovered.

Scientists at the ANU were looking into how protein supply could be used to treat diabetes when they realised the same method could be repurposed for fighting cancer.

“We thought OK, well protein is essential for humans to grow and proteins are also essential for cancer cells to grow so we thought maybe we can apply [this knowledge] to both treating diabetes and to stop the growth of cancer cells,” Dr Stefan Bröer from the ANU said.

“So it’s basically a sort of spinoff of other research we’re doing.”

But Dr Bröersaid the first attempts to block the entrance for proteins into the cell were foiled by the cancer.

“What we found is that the cancer cells can actually adapt,” he said.

“Basically we close one gate and we block it and [the cells] open up another separate reserve gate, if you wish, and they could get the supplies through there.

“So we know that we have to do a two-pronged attack and we have to not allow the cell to come up with this reserve way of getting the nutrients.”

An advantage of starving cancer cells is that it applies to a process that occurs across many different kinds of cancer.

“The problem with cancer is [that] you want to have very tailored therapies and sometimes a drug can only treat one cancer and not another cancer,” Dr Bröer said.

“We see in a lot of cancer cells that they seem to use the same principle as the one we discovered so we think this one might be more widely applicable than to just one cancer.”

He also suggested that, if the starving method proved to be successful, it might eliminate the need for treatments like chemotherapy that leave patients with undesirable side effects.

“We have some evidence that this will not harm normal cells in your body,” Dr Bröer said.

“As you know from cancer therapies there’s a lot of side effects, usually the immune system is harmed … possibly these side effects are less in [the starving] treatments.

Dr Bröer said the next step was to develop a compound or drug to block the proteins to be used in human trials.