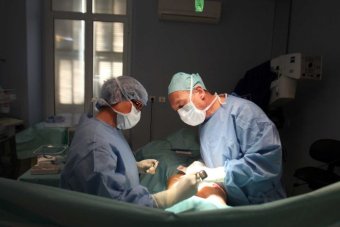 Photo: The report into TCI found some patients were given dangerously high doses of some drugs. (AFP: Sebastien Nogier)

Urgent national legislation is needed to protect patients’ lives from the actions of some cosmetic surgeons, health experts have warned.

The ABC revealed the damning report, which showed patients were given sedative drugs in excess of safe limits.

TCI has clinics in Sydney and the Gold Coast, with women flying in from around Australia for cut-price breast implants.

Professor Bartholomeusz said states and territories could not put the problem of cosmetic surgery safety on the back burner.

“We need urgent national legislation where patients’ lives are at risk,” he said.

He has met with health department representatives from all states and territories to discuss the issue.

The NSW Health Care Complaints Commission began an investigation into the Cosmetic Institute (TCI) in January 2015 when a 20-year-old woman nearly died when she had a cardiac arrest during a routine breast implant procedure in Sydney.

Amy Rickhuss was one of six patients who suffered potentially life-threatening complications, including rapid heartbeat, seizures and cardiac arrest.

The HCCC report suggests TCI’s use of anaesthetics was to blame.

“Local anaesthetic agents were used at TCI in excess of safe doses, and dose calculations — on occasion — were not individualised according to patient body weight,” it said.

If found “TCI’s consent procedures are therefore inadequate. Patients are being placed under either deeper sedation or general anaesthetic with no consent provided for this”.

Patients must give consent: experts

Health providers and facilities must be held to account for any breach of safety requirements, according to the Australian Hospitals and Healthcare Association (AHHA).

The Cosmetic Institute general manager Andrew Gill said the clinics had already taken action to address the issues investigated by the HCCC.

“Effective from last year, all TCI surgeries in NSW are now carried out at licensed premises at Concord Private Hospital,” he said.

He said the procedures were done under deep sedation or general anaesthetic, unless the use of conscious sedation was clinically necessary for a particular patient.

“TCI is also reviewing consent procedures and documentation to ensure that patients are fully aware of the level of sedation under which they will be placed,” he said.

Mr Gill said the clinics had reviewed its procedures to ensure safe upper limits for adrenaline and local anaesthetic usage.