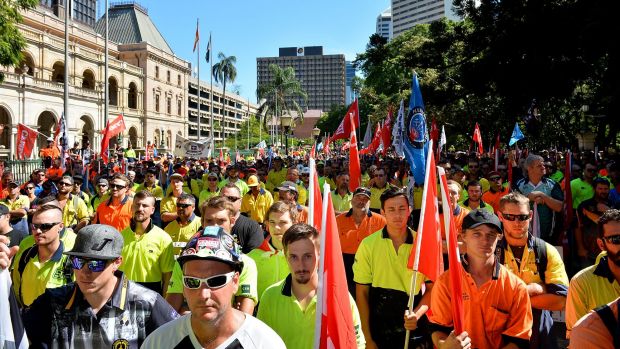 Workers and Union members protest for workers rights and the treatment of victims of Black Lung disease. Photo: Bradley Kanaris

Struggling to breathe is a daily occurrence for Keith Stoddart, a 66-year-old Queensland coal miner who was diagnosed with emphysema and coal miners black lung about a year ago.

Mr Stoddart’s battle for compensation and recognition of his disease, which he says was the result of over three decades of working in Queensland mines, was told to a crowd of hundreds of union workers and families outside parliament house on Wednesday.

Union members from across most industries rallied together to demand immediate action from the Queensland government to stop black lung disease.

Black lung disease is the term used to describe coal workers’ pneumoconiosis and is caused by prolonged exposure to coal dust. 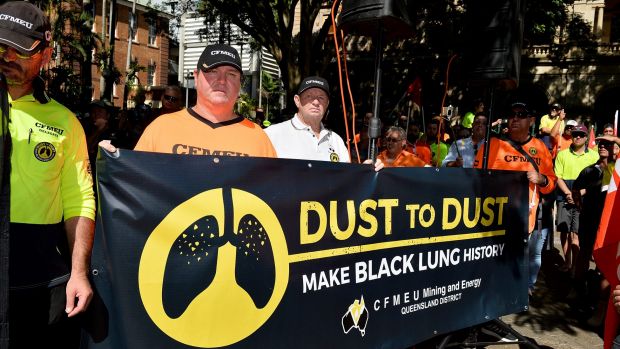 ‘Stop the cover up, stop black lung’ was chanted as CFMEU mining and energy division district president Steve Smyth told the sea of fluro-vested members how black lung disease, which was eliminated from Queensland for 30 years until September last year, was a situation that was getting worse and worse.

Since September 2015 six cases of black lung disease have been confirmed.

“Time for looking into it is over, I would like to see one of their family members have this terrible disease, or asbestos, see how they handle it then. Enough is enough. 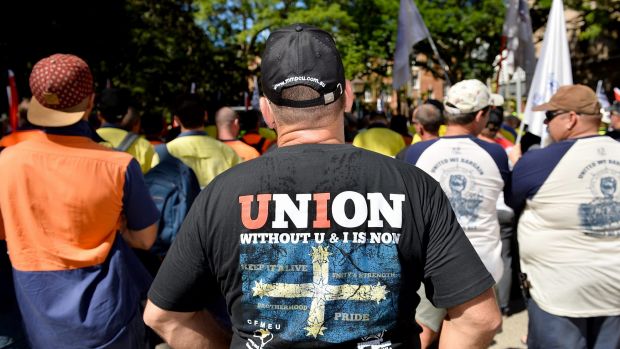 “Coal companies continue to expose workers to high levels of dust, yet the government takes no action to reduce those dust levels let alone take on a recommendations that we put forward that there should be independent monitoring.”

Mining companies select doctors, including general practitioners and physicians, as nominated medical advisers who are required to conduct a medical assessment of each miner before they start work and then at least once every five years. 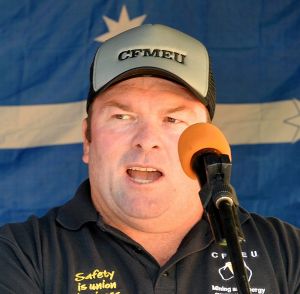 Mr Smyth said these medical advisors needed to be independent from coal companies with more specialised training and feared the six confirmed cases so far were just the beginning.

“It is just the tip of the iceberg. We believe there could be thousands of workers out there with the disease, we don’t intend to rest until we get it fixed and legislated,” he said.

“The government and companies want to play down the real figures, we are not about saying numbers, because to us these same men are fathers, brothers, grandfathers and mates who work in these coal mines to produce this coal to make this country wealthy and the big end of town.

“To us it is about mateship, not statistics. I am sick of hearing the bullsh-t, ‘They are just six people’, they are six real people who are now paying for their health for the rest of their life.

“They should be able to retire with health and dignity. A lot of them have an unknown future.

“We have at least another 15 cases in Queensland. Four of those that should have been reported that haven’t.

“Every coal miner has the basic right to get an x-ray get done and examined to the international standard, we are the only country that doesn’t apply.

“As we sit here today we continue to send x-rays to the United States to be reviewed by black lung experts because here in Australia, we don’t have the people or the expertise.”

Mines Minister Dr Anthony Lynham addressed Parliament on Monday and said records of the Coal Mine Workers’ Health Scheme had been cross-checked against Queensland hospital admission data to identify any possible unreported cases of coal workers’ pneumoconiosis, past or present.

“We are not waiting for cases to come to us; we are looking through Queensland health records, actively trying to research and find cases that may be out there in the community,” he said.

“Patient medical records have been reviewed by a respiratory physician who found insufficient information to determine conclusively that they had CWP or that they had been missed through the screening program.”

Mr Smyth has demanded the government take immediate action to ensure dust levels are monitored by an independent body, to have qualified radiologists not employed by coal companies, for companies to extend their health care and to fix the worker’s compensation law.

An independent review is under way in relation to the black lung disease, with a five-point action plan outlined in a statement released by Dr Lynham on April 8.

The statement outlines the need for a core group of coal mining medicos to be developed, action to be taken on coal mines exceeding regulated limits on dust levels, improvement on information collection, investigation into regulatory changes and putting this issue onto the agenda for the national council of mining ministers.

The final report is due to be released later this year.

“My department’s inspectors are taking firm action with the operator to ensure this level is reduced to the regulated limit,” he said.

“I encourage all committee members, including the CFMEU, to continue to examine all of the evidence, and work together to provide me with full, frank and considered advice.

“I commit here, again in this chamber, to act swiftly, in consultation with all parties, and to take whatever action is required — through regulation or legislation — to protect the health and safety of our coal miners.”