NORTH Queensland’s criticism of a lack of health infrastructure investment has been addressed, with the Palaszczuk Government injecting $90 million into hospital and health services across the state, with most going to the north.

Health Minister Cameron Dick said 48 new projects would deliver health infrastructure statewide, with $55 million to be spent between Bowen and the Torres Strait.

Mr Dick said 26 projects would be in the north, supporting more than 200 jobs.

They will include an expansion of the bone marrow unit at the Townsville Hospital, electrical upgrades at health clinics in the Torres Strait and a new roof for Cairns Hospital.

Refurbishment of the Townsville Hospital’s mental health unit and pharmacy are planned and the Eventide Charters Towers aged care home will be upgraded.

Mr Dick said the projects demonstrated the Government’s commitment to deliver for regional communities, particularly those in Queensland’s northern regions.

“We are serious about answering the cries of regional Queenslanders for investment in their local health facilities,” he said.

His announcement comes weeks after calls for the development of a northern Australian mega-state.

Queensland politicians, including Katter’s Australian Party MPs Shane Knuth and Robbie Katter, and Cairns MP Rob Pyne, want to force a referendum within 18 months on the state’s north seceding from the south, based on a perceived lack of interest and infrastructure in the north.

Mr Dick said most of the new health projects would start this year and some would be completed by Christmas.

“Funding for new infrastructure works and acceleration of existing infrastructure projects throughout Queensland is part of our commitment to maintaining and improving health services, no matter where they are,’’ he said.

“We know there is still a lot of work to be done to ensure all our health facilities and services are up to date and fit for purpose wherever they are situated.”

Mr Dick said a forward capital plan for health services over the next five years, was on the drawing board. 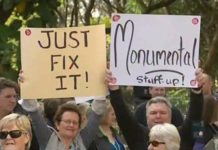