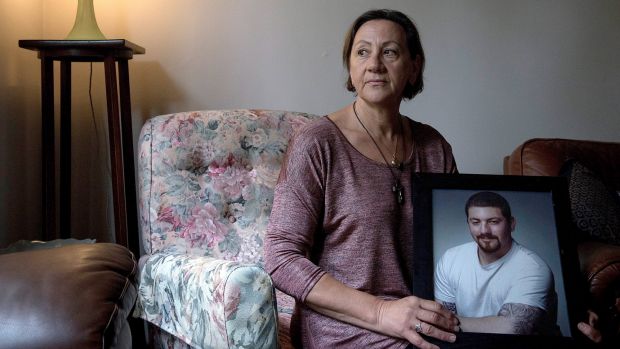 Grace Muscat with a photo of her son Leigh Aiple. Photo: Jesse Marlow

The Malaysian cosmetics clinic where medical tourist Leigh Aiple underwent surgery before his death has defended the care he received.

The Beverly Wilshire Medical Centre in Kuala Lumpur has released a statement saying Mr Aiple received “the best of medical and surgical care” and that steps were taken to minimise “all possible risks” associated with his surgery.

Mr Aiple died in his mother’s arms in Melbourne after a blood clot in his calf travelled to his lungs on May 12, 2014, hours after he had returned home on an international flight.

The cause of death was recorded as a pulmonary embolism linked to deep vein thrombosis, with risk factors including recent surgery and air travel  The Victorian coroner is investigating after a push by lawyers Maurice Blackburn on behalf of the family.

“Beverly Wilshire Medical Centre and our team had given the best of medical and surgical care to Leigh throughout his stay for medical treatment here,” the clinic said in a statement emailed to Fairfax Media on Thursday night.

“Full explanation had been given to the patient prior to surgery with regards to the multiple procedures to be performed within the short time frame, post-operative care and the possible risks and complications.

“All the necessary steps to prevent and minimize all possible risks had been taken including the prevention of deep vein thrombosis (“DVT”).

“The Senior Management Executives were in close contact with Gorgeous Getaway and Leigh’s mother during the difficult period. We deeply sympathise with Grace and our feelings lay with the family members.”

The statement comes after surgeons in Australia expressed concern about the large number of procedures Mr Aiple’s body had undergone – eight in two surgeries, days apart – and warned that symptoms he’d described in emails before his death should have rung alarm bells for a possible clot.

Records from his medical travel agent – Gorgeous Getaways – have laid bare a chaotic month in Kuala Lumpur after the surgeries in which Mr Aiple experienced stitches bursting open, fatigue and wounds that continued to leak.

However, it is allegations of dizziness and fainting spells described by Mr Aiple in an email to his mother three days before his death that Australian doctors say should have rang alarm bells.

“I blacked out yesterday in the bathroom and woke up on the bathroom floor, lying in my own diarrhoea … when I got off the floor to clean myself, I started hyperventilating and couldn’t breath, my chest was tight and heartbeat was dangerously rapid,” Mr Aiple wrote on May 9.

Three days earlier he had described two similar scares.  “I fainted on two different days when the girls were doing my dressings. I’ve been short of breath and my heartbeat has been beating rapidly, like crazy.”

It is understood a chest X-ray and blood tests were ordered around May 9, and the doctor who performed Mr Aiple’s surgeries – Dr Mohamad Nasir Zahari? – declared him fit to travel on May 10.

But those tests alone would not have ruled out a pulmonary embolism, which was a possibility given his symptoms, said plastic surgeon Dr Gazi Hussain, the honorary secretary of the Australian Society of Plastic Surgeons.

Dr Hussain said the post-surgery blackouts described by Mr Aiple were consistent with an embolism, which if present would likely have been detected by a CT angiogram or a test known as a VQ scan.

“You could not exclude that he could have had a small pulmonary embolism prior to getting on the plane,” Dr Hussain said. “You get DVTs from long operations, and then we know long flights are also a significant risk factor and then particularly surgeries such as abdominoplasty or tummy tucks, have an increased risk,” he said.

“Three of those things in combination, and if somebody then is showing signs of dizziness and fainting, you would be concerned about saying that it’s okay to get on a plane and fly.”

Dr Jill Tomlinson, a Melbourne-based plastic surgeon, also said Mr Aiple’s blackouts could have been linked to a clot.   “If I had a patient who reported losing consciousness, to me I’d be very quickly getting them to hospital and investigating them for a PE,” she said.

Dr John Flynn, censor-in-chief at the Australasian College of Cosmetic Surgery, said the risks of any surgical procedure were magnified the longer it went on and complications could arise when multiple surgeries were performed with limited recovery time.  “The patients ability to recover and tolerate the extra surgical assault is going to be limited,” he said.