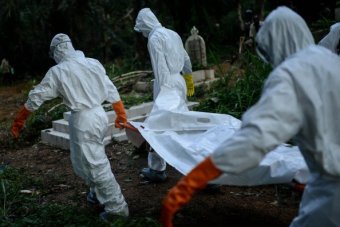 West Africa’s Ebola outbreak no longer constitutes a threat to international public health, the World Health Organisation (WHO) says, declaring an end to a nearly 20-month emergency that has killed about 11,300 people.

WHO director-general Dr Margaret Chan accepted the recommendations of a committee of independent experts who also called for the lifting of any travel and trade restrictions affecting Guinea, Liberia and Sierra Leone.

“The Ebola outbreak in West Africa is no longer a Public Health Emergency of International Concern (PHEIC),” Dr Chan told a news briefing at WHO headquarters in Geneva.

“However a high level of vigilance and response capacity must be maintained to ensure the ability of the countries to prevent Ebola infections and to rapidly detect and respond to flare-ups in the future.”

Ebola, a haemorrhagic fever, has killed more than 11,000 people in the three countries since emerging undetected in late 2013 in the forest of Guinea.

It caused global alarm in mid-2014 — and heavy criticism of WHO, the UN health agency — as governments and aid agencies rushed to help contain the epidemic.

All original chains of virus transmission have now ended, although new clusters of infections continue to occur due to reintroductions of the virus, the WHO said in a statement.