People aged over 40 who dance almost halve the risk of dying from cardiovascular disease, researchers at Western Sydney University’s School of Science and Health say.

They think the mixture of interval training with social interaction could be the key factor.

Western Sydney University associate professor Dafna Merom said their research has found that people who participate in dance have a 49 per cent reduction in risk of dying from cardiovascular disease.

She and her colleagues analysed data from more than 48,000 people older than 40 who live in Great Britain.

Over a 10-year period, those who danced were less likely to die of heart disease than those who rarely or never danced.

“We saw that dancing not only had the greatest protection against cardiovascular disease, if comparing to walkers for example, they benefited from an additional 21 per cent reduction as compared to walking,” she said.

Professor Merom said it did not matter what type of dance a person did, as long as they worked up a bit of a sweat.

“Dance mimics the high-intensity training interval, but disguised, it’s like an exercise in disguise,” she said.

“You reach some high intensity from folk dancing and some kind of quick ballroom dancing, you have to keep with the beat and so without noticing you really reach the high intensity of physical activity.

“And the higher the intensity the better the benefits.”

Professor Merom said there could be other factors that make dancing so good for people’s health.

“The other mechanism could be that simply dancers are hooked to this activity and they really have life-long habits of being regularly active,” she said.

“Last, we think that social dancing has other effective influence on your mood and we know that stress is a risk factor for cardiovascular disease, so being in a social environment, smiling, listening to movies, you just forget where is your stress and you get the benefits.”

The study has been published in the American Journal of Preventive Medicine.

‘It’s not just the physical exercise, it’s the social outlet’

The study’s findings came as no surprise to 78-year-old Clem McNamara, who has had three triple bypasses.

“I used to love dancing with my own steps,” Mr McNamara said.

“I used to love that; I used to be wringing wet, soaking with sweat, and you always feel good.”

Mr McNamara said it has been hard to get other men interested in dancing.

“It’s hard to get men to sort of take up dancing in my eyes, I think a lot of them prefer to go and have a few beers and that,” Mr McNamara said.

“But they don’t really know what the consequences are because they haven’t been through the mill, they drink too much and they’re full of all that grog and they’re not sweating it out.”

His wife Wendy McNamara said she had been dancing for decades.

“With dancing particularly it’s not just the physical exercise, it’s the social outlet particularly as you get older, you lose lots of friends, they go here and there, and it’s nice to meet a new lot of friends that you can meet socially dancing,” she said.

“So it’s wonderful for everybody.” 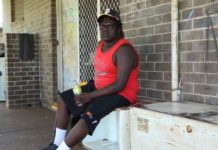