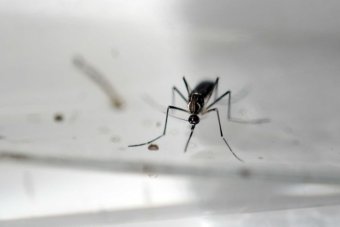 Photo: Zika has been spread through Latin America by the Aedes aegypti mosquito. (AFP: Marvin Recinos)

A man who recently visited South America has tested positive for Zika virus in Rockhampton.

Queensland Health said mosquito spraying was being carried out around The Globe Hotel in Depot Hill where the man had spent time at, after mosquitoes that carry the disease, Aedes aegypti, were detected in the area.

The virus was not acquired locally.

Queensland’s acting chief health officer Dr Sonya Bennett said Zika virus, like dengue, could be spread if an Aedes aegypti mosquito bit an infected person, was then itself infected, and then went on to bite another person.

“As a precaution, spraying is currently taking place near the hotel,” Dr Bennett said.

“Homes and businesses outside of this area are at a reduced risk because the Aedes aegypti is not known to fly very far.”

Zika is a mosquito-borne illness that has surged through Latin America and has been linked to birth defects in children in the region.

However, a four-year survey in Brazil suggested Zika may not be the cause of microcephaly, which results in babies being born with abnormally small heads.

On Thursday, Queensland Health want to enact a public health declaration, which will enable the spraying in the yards of homes and businesses within a 200 metre radius of The Globe Hotel.

“I understand this may cause some concern to pregnant women around Depot Hill. Public health officers will be conducting door knocks of the area and speaking personally with pregnant women,” Dr Bennett said.

“Wearing insect repellent at all times of the day will also help reduce your risk of being bitten by a mosquito,” Dr Bennett said.

Dr Bennett said residents in the affected zone were encouraged to get tested for the virus if they experienced symptoms that could be related to Zika virus infection in the next fortnight.

The test involves a simple blood sample with results returned in a matter of days.

Symptoms are similar to dengue and chikungunya and include:

Eight people in Queensland have now contracted the virus this year, however no-one contracted it in the state.