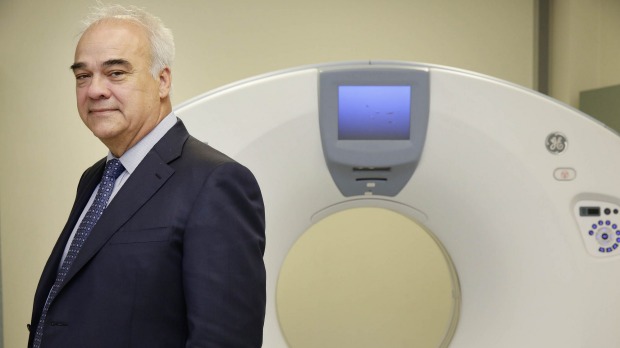 Primary Health Care, run by chief executive Peter Gregg, is one of the two big ASX-listed pathology companies in the sights of the federal government.  Photo: Jessica Hromas

Federal Health Minister Sussan Ley has stepped up the fight against big pathology companies opposing cuts to bulk-billing incentive payments for blood tests, X-rays and MRIs, saying a report by the Grattan Institute is further proof they are embarking on a scare campaign to protect profit.

Big ASX-listed pathology companies such as Sonic Healthcare and Primary Health Care are at the forefront of vigorous lobbying and a consumer campaign running in 5000 pathology collection centres. They are attempting to stop $650 million in cuts to bulk-billing incentive payments for providers identified by the federal government in December 2015 in a budget update.

A new report by the Grattan Institute released on Sunday revealed that taxpayers had got “minimal benefit” from the automation of processes across the industry, which had led to “ever-cheaper ways of delivering services”.

“Thanks to market consolidation, two publicly listed firms now control more than 75 per cent of the market,” the report says.

“The way Australians pay for pathology services has hardly changed in the last 50 years. We pay as if testing was still done by thousands of small providers manually processing tests, and not by two industry giants with automated services,” the report says.

The Grattan Institute found the Australian pathology industry was “certainly efficient” but Medicare was not meant to provide guaranteed revenue for corporations. The government, through Medicare, spent $2.5 billion on pathology services in 2014-15.

The report recommends that the way Australians pay for pathology can be improved to allow the government, and taxpayers, to the “share in the massive efficiency savings that the industry currently keeps to itself”. It recommends that patient co-payments for tests should be abolished because patients aren’t the real consumers of the tests – it is the doctors who order them and use the results. “There is little point in co-payments if they don’t improve care but in fact punish the sick, while enabling industry to use the threat of co-payments as a bargaining chip in policy battles.”

Ms Ley said on Sunday there were no justifiable grounds for large pathology companies to introduce a $30 co-payment for blood, urine and Pap tests.

She said the report was “further proof this is nothing but a tacky scare campaign by stock exchange-listed pathology companies aimed at protecting their profits by unfairly playing on the fears of some of our most anxious and vulnerable patients”. The Grattan report found that over the past decade the average number of pathology tests and services per person has risen 40 per cent from 3.9 per head in 2004-05 to 5.4 in 2014-15.

Primary Health Care chief executive Peter Gregg and Sonic Healthcare chief executive Colin Goldschmidt were extremely critical late last week of the federal government for its policy decisions and for making changes without consultation. Dr Goldschmidt said the industry had substantial public clout and access to a lot of people who used the industry’s 5000 collection centres, and the campaign against the government’s planned changes meant “this is not a done deal yet”.