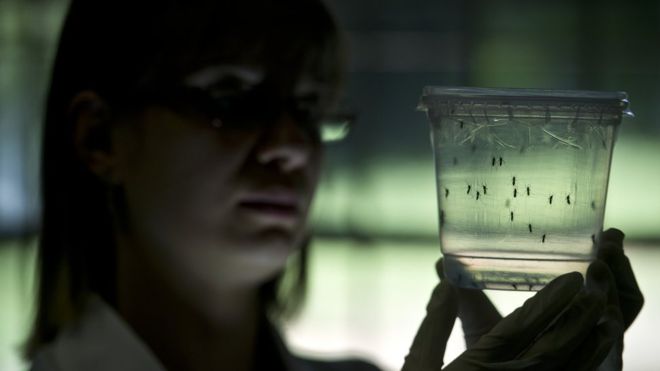 With concerns about Zika virus mounting, President Obama requested $1.8 billion in emergency funds Monday to help combat the disease, which has now spread to more than two-dozen countries, mainly in the Americas and Caribbean islands. The emergency funding request comes just as the Centers for Disease Control and Prevention announced that their command center would be going to its highest level of alert to meet the urgent demand for support, reflecting the growing concern about the prospect of Zika virus gaining a foothold in the mainland U.S.

The Zika virus, which is spread by the Aedes aegypti mosquito, is strongly suspected to be linked to microcephaly, a birth defect that has affected thousands of infants in Brazil since the outbreak started in May. Babies born with the birth defect have smaller heads and brains that aren’t fully developed, which can result in life-long developmental problems. But just this week, leading medical authorities in the U.S. and Brazil announced the startling discovery that Zika may have even more devastating effects on fetal development than originally thought.

With the high volume of news about the Zika virus, it’s tough to stay up-to-date. Here’s the latest information you should know:

1. World microcephaly experts are shocked by the severity of Brazil’s cases

Researchers in Brazil are currently investigating about 4,000 suspected cases of microcephaly reported since October, and the preliminary findings are alarming. Experts who reviewed the medical records of babies with confirmed microcephaly are struck by the severity of cases in Brazil, Reuters reported Tuesday. Microcephaly can result in a range of outcomes, from no observable problems at all to severe intellectual disability and developmental delays. But Brazil’s cases, which appear to be linked to the Zika virus, are unusually devastating because the babies don’t just have smaller than normal heads. Initial scans indicate the presence of brain calcification, cerebral cortex abnormalities and spinal fluid between the baby’s skull and brain — a sign that the brain actually shrank while in the womb. Doctors said the findings are indicative of “very severe, destructive injury to the brain.”

The discovery adds to a growing body of evidence that the babies suffering microcephaly in Brazil have a serious and unusual pattern of brain and nerve damage. In a study of 29 Brazilian infants with microcephaly, more than one-third were also found to have serious eye problems and malformations, researchers reported Tuesday in an article published in JAMA: Ophthalmology. In addition to ocular lesions, which were found in several parts of the infants’ eyes, the damage done by the microcephaly itself could also severely affect vision, the authors wrote. After ruling out other common causes of such eye problems, the researchers concluded that fetal exposure to Zika virus appears to be “associated with vision-threatening findings, which include bilateral macular and perimacular lesions as well as optic nerve abnormalities in most cases.”

Although only a limited number of cases have been examined, the observations so far hint at a “tough road ahead” for the affected children and their families. Often, children with severe microcephaly “require treatment for epileptic seizures, as well as physical, respiratory and speech therapy,” Reuters reports. “They may need help with everyday activities, such as eating or walking.” And some of the most severely affected infants may face a very short lifespan — anywhere from a few months to 10 years — particularly if they don’t have access to appropriate health care.

President Obama asked Congress Monday to approve $1.8 billion in emergency funds to help American scientists learn more about the virus and how to control it. If approved, the funds would go towards a variety of different scientific endeavors including “mosquito control programs, vaccine research, education and improving health care for low-income pregnant women,” USA Today reports.

The additional funding is “an important step and needed measure,” said Dr. Peter Hotez, dean of the National School of Tropical Medicine at Baylor College of Medicine in Houston. He said the funding should also be used to target low-income areas around the Gulf of Mexico, which tend to be hit hardest by mosquito-borne diseases. “We’re going to need to conduct environmental clean up to help wipe out mosquito breeding areas, while providing quality house screens to pregnant women who live in poverty,” Dr. Hotez said.

Dr. Fauci said the funds would also be used to ramp up efforts to develop a vaccine for the virus, with the goal of completing the first phase of trials by the end of the year — and having a vaccine widely available long before the usual three- to five-year time frame.

While Zika virus is spread primarily through mosquito bites, mounting evidence suggests that the potential for human-to-human transmission may be greater than once thought.

Last week, the U.S. Centers for Disease Control and Prevention confirmed that the virus can remain in body fluid like semen and can be passed on through sexual contact. What we don’t know, however, is how long the virus can last in semen, which means people who may have been exposed to the virus and who have a pregnant partner should use condoms consistently until scientists find out more.

Similarly, Brazilian scientists recently discovered live Zika virus in samples of saliva and urine, indicating that these fluids could be a potential source of transmission. This has prompted health officials to urge attendees of this year’s Carnival festivities to avoid the tradition of kissing other party-goers. Some researchers also are also recommending that pregnant women should avoid kissing or sharing drinking glasses with anyone possibly infected with Zika, while other scientists argue that transmission via saliva is highly unlikely.

The United States Olympic Committee (USOC) reportedly advised athletes and sporting staff that they should consider skipping the Rio Olympic games in August if they fear for their health due to the outbreak in Brazil. The message was relayed during a conference call in late January involving USOC officials and leaders of the U.S. sports federations, Reuters reported Monday:

Federations were told that no one should go to Brazil “if they don’t feel comfortable going. Bottom line,” said Donald Anthony, president and board chairman of USA Fencing.

The USOC’s briefing to sport federations is the latest sign that Olympics officials are taking the Zika threat to the games in Rio de Janeiro seriously, and acknowledging that at least some athletes and support staff could face a tough decision over whether to attend.

Besides the athletes, Brazil expects as many as 380,000 tourists to visit Rio in August and infectious disease experts say there is a risk some could spread the virus to new areas once they return to home.

5. Over 3,000 pregnant women in Colombia have Zika virus

After Brazil, which has seen over 1.5 million Zika cases, Colombia is the second hardest-hit country by the disease; 25,645 residents have it, including 3,177 pregnant women, according to figures released this week. The country has not seen any cases of Zika-linked microcephaly yet, Reuters reports, but they also haven’t had nearly as many cases of the virus.

However, three Zika patients in Colombia have died of Guillain-Barré syndrome, a paralyzing condition that may also be triggered by Zika virus, the Associated Press reports.

As in Brazil, the rising number of pregnant women infected with Zika is prompting a heated national debate on abortion access in Colombia, which is severely restricted as it is throughout most of Latin America.