Just hours after the World Health Organization declared the West African Ebola outbreak completely over, a suspected case of the diseases has been reported in Sierra Leone.

The Sierra Leone health ministry is reportedly investigating a death reported to be from Ebola in the Tonkolili District.

Spokesman for #SierraLeone #Ebola centre says two tests on a deceased return a positive test for #Ebola in the north of the country.

The World Health Organization declared an end to the deadliest Ebola outbreak ever earlier on Thursday after no new cases emerged in Liberia, though health officials warn that it will be several more months before the world is considered free of the disease that claimed more than 11,300 lives over two years.

Thursday’s reported success comes after a harrowing toll: Nearly 23,000 children lost at least one parent or caregiver to the disease. Some 17,000 survivors are trying to resume their lives though many battle mysterious, lingering side effects. Studies continue to uncover new information about how long Ebola can last in bodily fluids.

The WHO did note in their announcement that flare-ups are possible, especially in places like Sierra Leone, which, alongside Liberia and Guinea, was considered the epicenter of the outbreak.

Additional reporting by the Associated Press. 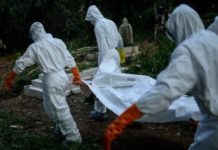