A Queensland first surgery has given a child her Christmas wish.

New technology has helped Brisbane doctors remove the cause of four-year-old Rowena Alexander’s severe epilepsy, allowing her to head home to her family in Charters Towers in northern Queensland.

The lesion was also dangerously close to the language and motor areas of her brain.

Special electrodes were inserted into the brain to map the lesion’s exact location and the surgeon safely removed it.

It was the first time it has been performed on a child in Queensland.

Paediatric neurologist Dr Stephen Malone, who was part of her treatment team at Lady Cilento Children’s Hospital (LCCH), said she was having seizures up to ten times an hour prior to the surgery.

“We’re confident that her epilepsy will be much improved if not cured,” Dr Malone said.

Before this, Queensland kids would have to go to Melbourne or Sydney for surgery.

Now it is hoped kids like Rowena will be able to stay in their home state.

‘The plan is to actually have her seizure-free’

Her mother, Martha Alexander, said it was a frightening time.

“I was very, very worried about what was the next outcome,” she said.

“They couldn’t control it with medication.

“That was probably the scariest part.”

Rowena was frequently admitted to intensive care in Townsville but when the Royal Flying Doctor Service transferred her to LCCH in Brisbane six weeks ago, Ms Alexander had faith.

“I knew that they would find a solution,” she said.

The next step is to wean Rowena off her medication.

“The plan is to actually have her seizure-free,” Ms Alexander said.

Ms Alexander said was looking forward to her daughter having a normal childhood, but the first step was to get back to normal life.

They will be heading home to see her five brothers and sisters in north Queensland in time for Christmas. 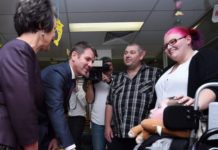 Government silence on prosecutions for medical cannabis use condemned