It’s Amanda Sibosado’s mission to ensure young people aren’t as ignorant about their sexual health as she was. She takes the reins of @IndigenousX during Aboriginal and Torres Strait Islander HIV Awareness Week 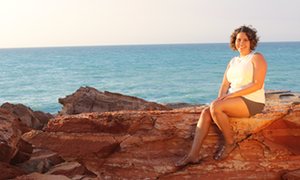 ‘I trekked around the Pilbara briefly before working for four years in the Goldfields (WA), followed by three years in Perth for FPWA Sexual Health Services.’ Photograph: Supplied

This week I am honoured and excited to be hosting @IndigenousX during Aboriginal and Torres Strait Islander HIV Awareness Week next week.

My sexual health education was limited. I recall learning about puberty and anatomy at school. I also recall learning how to put a condom on with those plastic banana demonstrations. I’m sure you all know the ones!

Most of my sex education came from peers, and a big chunk of it came from making mistakes as I went along. Needless to say, my first sexual experiences were not pleasant and they were not safe. Sure, I knew about condoms, but why did I need to use them? I didn’t know about STIs so there wasn’t much motivation. Even if I had been motivated to use them, I certainly wasn’t having sexual experiences where I felt safe negotiating sex or condom use.

Around the same time, many of my peers, most of whom were non-Indigenous, started having sexual experiences too. Many of them were similar to mine. Some of them resulted in unintended pregnancy. Some of them kept their babies, others had abortions but none of them was prepared for having to make decisions like that.

I also knew three women (again non-Indigenous) who had been sexually abused as children by family members. One of them was in her late 30s when she told me and was still suffering from depression, which was not only linked to the abuse but also to a violent relationship. I was exposed to all of this before I had even turned 17.

I was lucky to have a great relationship with the school nurse who referred me on to our local youth sexual health clinic through Sexual and Reproductive Health WA (formerly FPWA Sexual Health Services). They were a great resource and support to me right up until I was 24 when I started accessing their “adult” clinic. Little did I know back then that nine years later I would be working for them.

These experiences of my adolescent years really set the foundation that I built my career on; I didn’t want anyone to go through what I or my peers had. STIs are preventable. Unintended pregnancy is preventable. We should not have had to learn the hard way. So in 2005 I applied for my first job in the health department and was successful. I was incredibly naive, but extremely excited and very passionate!

Aboriginal people deserve to have safe, respectful, pleasurable relationships free from STIs and blood borne viruses. There are cultural considerations that need to be made in each community about what is and isn’t appropriate. As an Aboriginal woman, I adhere to these and take guidance from local people because it varies from community to community. These cultural considerations do not mean that we can’t talk about sexual health at all. It’s up to us to stop the spread of STIs and HIV in our community so we need to be talking about it and educating ourselves and each other.

HIV, as with other STIs, is completely preventable. The best way to prevent transmission is wearing condoms and knowing your HIV status. To know your status you need to get a blood test. If the test results come back negative, great, keep practising safe sex. If the test result comes back positive, there are fantastic treatments available that actually help prevent onward transmission. You will still live with virus for the rest of your life, but if you take the medication you will have a normal life expectancy. HIV treatment has come a long way since the 80s. It’s now a manageable chronic disease; it is not the death sentence it once was.

Start having a conversation today with your kids, family or friends. Don’t worry if you don’t have all the answers, sit down and find the answers together. You and me can stop HIV!

If you want to know more about the work and events happening during Aboriginal and Torres Strait Islander HIV Awareness Week check out the hashtag #ATSIHAW and #UANDMECANSTOPHIV.