Swimming in a pool of syrup would be difficult for most people, but for bacteria like E. coli, it’s easier than swimming in water. Scientists have known for decades that these cells move faster and farther in viscoelastic fluids, such as the saliva, mucus, and other bodily fluids they are likely to call home, but didn’t understand why.

Researchers from the School of Engineering and Applied Science and the School of Arts & Sciences have come together to find an answer. Their findings could inform disease models and treatments, or even help design microscopic swimming robots.

The study was led by Paulo Arratia, an associate professor in the Department of Mechanical Engineering and Applied Mechanics at Penn Engineering and lab member Alison Patteson, a graduate student. Postdoctoral researcher Arvind Gopinath, a member of the Arratia lab, and Mark Goulian, the Edmund J. and Louise W. Kahn Endowed Term Professor of Biology in Penn Arts & Sciences, contributed to the study.

It was published in Nature Scientific Reports.

Experiments in the 1970s showed that, when in water, E. coli demonstrated what is known as “run and tumble” swimming. A bacterium would swim in a straight line, then tumble, or change direction in a random way. This is a good strategy for finding food, but it was unclear how that strategy would change in the more gelatinous fluids they tend to live in.

“What’s different now is that we can characterize the material properties of these fluids more precisely,” Patteson said, “so we can connect changes in those properties to changes in the swimming behavior of the cells in a very systematic way. We’re getting a more molecular view of how things work.”

The researchers were also able to track individual bacteria, and even single polymer molecules, which when added to water in different amounts, make it more viscous and elastic.

When viscosity increases, E. coli are less able to separate their braid of whip-like flagella. When they rotate together like a propeller, bacteria move forward, but having each rotate in different directions is what allows bacteria to turn. This means they are less likely to tumble when in more viscous fluids.

“In viscous fluids, their movement is ballistic, like a bullet,” Arratia said. “They swim straight and rarely turn, which means they can travel farther.”

When elasticity increases, the E. coli‘s swimming strokes become more efficient. In water, the bacteria tend to wobble, but when surrounded by springy polymers, they become more stable. With individual polymer molecules roughly the same size as a single bacterium, the bacteria’s flagella physically stretch out the coiled-up polymers like a rubber band. The force of the polymers pushing back helps the bacteria to swim faster.

“We have to take these factors into account when thinking about how fast these bacteria can spread,” Arratia said.

Materials provided by University of Pennsylvania. Note: Content may be edited for style and length. 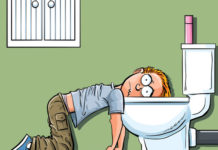 Explainer: what is gastroenteritis and why can’t I get rid of it?

A Mobile Health Innovation That Could Help Stop Ebola 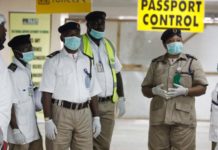