LONDON — A Scottish nurse who was readmitted to hospital last month with complications related to the Ebola virus, which she contracted as an aid worker in Sierra Leone last year, has made a full recovery.

Pauline Cafferkey, who is no longer infectious, was discharged from the Royal Free Hospital in London and transferred to a hospital in Glasgow, according to a statement from the London hospital on Thursday.

“I am forever thankful for the amazing care I have received at the Royal Free Hospital. For a second time staff across many departments of the hospital have worked incredibly hard to help me recover and I will always be grateful to them and the NHS,” Cafferkey said in the statement.

“I am looking forward to returning to Scotland and to seeing my family and friends again.”

Cafferkey, 39, who was working for Save the Children in Kerry Town when she contracted Ebola, was transported from Glasgow to an isolation unit earlier this month. Initially, the hospital said she was being treated for an “unusual late complication” of the virus; after her condition deteriorated to critical, however, they said she was again suffering from Ebola.

The World Health Organization says it’s possible in rare instances for patients who survived Ebola to develop the lethal disease again, when the virus lingering in the body starts to replicate at high levels.

Since Ebola broke out in Guinea’s forest region last year, it has killed more than 11,200 people in West Africa, in the largest recorded outbreak of the virus. 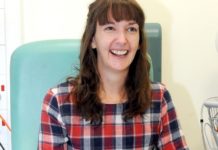