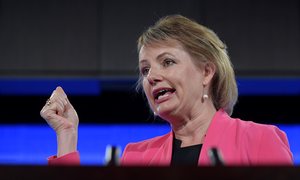 The health minister says some policies are not value for money and others are simply becoming too expensive for lower-income consumers. Photograph: Lukas Coch/AAP

The federal government has released an online survey on consumers’ expectations of private health insurance. The health minister, Sussan Ley, said expensive “junk” policies had caused half a million Australians to abandon their all-inclusive policies in the last year.

Ley said the survey was aimed at restoring confidence in the private health system, as many policies “let down” patients.

“In the last 12 months, we have seen 500,000 all-inclusive health insurance policies dumped or downgraded. That is of alarm to me,” she told reporters on Sunday.

She said some policies were not value for money, and others were simply becoming too expensive for lower income consumers.

“When I see policies that, for example, only look after you in a public hospital, I’m happy to describe those as junk,” she said.

“Those products are not worth very much,” he told Guardian Australia. “They do nothing but satisfy the exemptions for the Medicare surcharge.”

The survey asks if private health insurance rebates should go to policies that only cover private services in public hospitals.

It also asks if people should be charged different premiums for private health based on factors such as gender, age and smoking status.

“We’re not afraid of asking those tough questions,” she said, and added any changes would not be made to existing consumers straight away. “I’m talking about incentives, not exclusions. People who have private health insurance now, they can be reassured that we won’t be changing the way we look after them.”

The opposition health spokeswoman, Catherine King, said focusing on smokers meant Ley was “clearly opening the door for health insurance to be levied on the basis of risk”.

“If the poll endorses charging smokers more for health insurance, how long before the government moves to look at charging people more based on their age, weight, alcohol consumption, general fitness, genetic testing or family history of cancer,” she asked.

“Labor will look at any actual serious proposal to make health insurance better for consumers, but any move to scrap community rating and price health insurance based on risk will simply shift the most seriously ill patients on to public hospitals.”

Owler said charging different premiums based on lifestyle factors would lead to an American-style two-tiered health system where low-income patients did not get the care they needed, and high-needs patients could not get insurance because they cost too much to look after.

He said asking non-smokers what they thought of making smokers pay more was pointless.

“What do you think they’re going to say? Do we really need to spend money in asking that question,” he said, labelling the survey “mindless” and “expensive”.

The Coalition argued changes Labor made while in office to the private health insurance rebate, including means testing it and linking it with CPI, had led to the reduction in Australians covered.

“We in the Liberal and National parties are very strong supporters of the private health system. It’s the perfect complement to the public health system,” Ley said. “Unfortunately the attacks that Labor made on private health generally have left people uncertain and concerned about what this product can do for them.”

The number of people who ditched all-inclusive policies fell by 500,000 in 2014-15, but the number who purchased policies with gap payments and service exclusions increased by nearly 560,000, Ley acknowledged.

Owler warned the statistics were misleading, pointing to the fact large health funds such as Medibank had recently written to consumers telling them they had been downgraded to less inclusive policies in an effort to chase higher profits.

“This is the actions of the health funds,” he said. “This has not been the decision of many customers.”

Labor has pointed to statistics released by the Australian Prudential Regulation Authority to show the percentage of the overall population covered by private health insurance has gone from 44.9% in 2009, to 47.4% in 2015.

“Contrary to the minister’s scaremongering, private health insurance membership continues to rise, covering a record 47.4% of the population in the year to June,” King said.

The online survey will run until 4 December, after which Ley will consult with stakeholders on any potential changes.