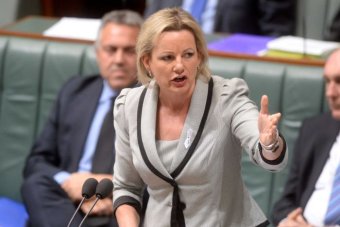 Photo: Health Minister Sussan Ley said people were telling her their needs were not being met by the current rules and regulations of private health insurance. (AAP: Alan Porritt)

Half a million Australians dropped or downgraded their private health insurance in the last financial year, causing “alarm” for the Federal Health Minister who says consumers are not getting value for money from their policies.

Sussan Ley has launched an online survey that asks voters if premiums should be charged according to a person’s smoking status, age, gender or “health risk factors”.

“It’s important that we get people’s thoughts but I do want to say that I’m really about incentives not exclusions.”

However, Labor and the Greens have raised doubts over the Government’s plan to potentially take smoking into account, saying it could lead to other risk factors being considered.

Ms Ley reassured people that existing consumers would not be slugged on the grounds they were unaware of the risks of activities like smoking when they were younger.

“I see this very much as the future, the future of the next generation and we know that encouraging prevention is just a whole lot better than insuring against disease when it strikes even though no-one knows when that might happen,” Ms Ley said.

Ms Ley said Australians were paying too much for policies that did not deliver value.

“This is something we need to fix.”

The consultation will run for four weeks, asking consumers for their views on what services should be covered by policies and how they can deliver better value for money.

Smoking penalty a step away from universal health system: Greens

The survey launch coincides with figures that show 500,000 Australians who prepaid their health insurance premiums for two years to avoid Labor’s means test were now downgrading their cover with many buying “junk” policies of little benefit.

The APRA figures showed the number of non-exclusionary — also known as “all inclusive” — private health insurance policies with hospital cover fell by 500,471 to 3.5 million in 2014-15.

In contrast, there was a 558,619 increase in the number of health policies with hospital cover that exclude certain medical services and also require patients pay an excess and co-payment, or gap.

“While the Minister is focussing on smokers, she is clearly opening the door for health insurance to be levied on the basis of risk,” Ms King said.

“If the poll endorses charging smokers more for health insurance, how long before the Government moves to look at charging people more based on their age, weight, alcohol consumption, general fitness, genetic testing or family history of cancer?”

“I’m concerned in general that we’re moving away from having a universal health system in this country,” Mr Bandt told reporters in Canberra.

In its annual report on the industry, the ACCC said there are a number of market failures in private health insurance that impede consumers’ ability to make choices that are likely to be in their best interests.