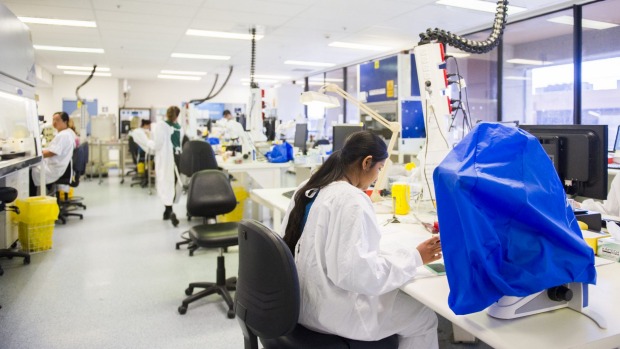 Workers in a Pathology laboratory at The Canberra Hospital. Photo: Rohan Thomson

More doctors and union representative have called on the ACT government to take strong action on bullying in hospitals and extend any program to deal with the problem to Calvary Hospital.

The lobbying comes after the government released a KPMG report on training programs at the Canberra Hospital, which revealed junior staff had faced long-running bullying, harassment, sexism and management failures.

The Australian Salaried Medical Officers Federation will meet with ACT Health director-general Nicole Feely? this week to discuss the findings of the report and instances of bullying in hospitals.

“We accept that there is a problem and want to work with seniors, juniors and management to ensure appropriate and transparent process,” she said. “We want to get this right.”

“At the top of our list is the report, and we are looking to work with management to establish fair and transparent processes and look to have an outcome that recognises the intricacies of medical education.”

The KPMG report into the hospital’s training programs detailed sexual harassment and propositioning in the workplace, items being thrown at staff, belittling of complainants, public humiliation, and abusive phone calls, text messages and emails.

More than three quarters of respondents observed bullying, discrimination and harassment, with complaints unlikely to be resolved in a timely or effective way.

Dr Hallam, a pathologist at the Canberra Hospital, said the relationship between junior and senior doctors was complicated and was different to a usual student-pupil partnership.

“You have the patient and the focus is always on patient outcomes, and it can be very stressful at times,” she said.  “There is no way we condone any issues of bullying or some of the other things that have been highlighted.”

“Just like anywhere there are accepted norms of behaviour, and the relationships in health are often more complicated because there is a disparity of power between groups.”

ACT Australian Medical Association president Dr Elizabeth Gallagher has questioned whether the government’s response to the bullying report would be successful given a perceived lack of engagement with junior staff.

KPMG invited 401 hospital staff, including executive directors and clinical directors, to focus groups in July. Only 62 participated. Of the 50 directors invited, 22 turned up.

ACT Health Minister Simon Corbell is to meet with the AMA in November, and has described the KPMG report as the start of a process, not the end.

“Whatever it is, any robust, transparent and equitable system should be developed across ACT Health care and should be adopted in the private as well as the public sector.”

“We want great health care and you need to have happy staff to achieve that.”

The report found staff feared that if they complained about misconduct they would “rock the boat” and trigger retribution and a poor performance rating in competitive training environments.

Some trainees were not willing to “take the gamble” by complaining in case their contract was not renewed. Future employment was also a concern.