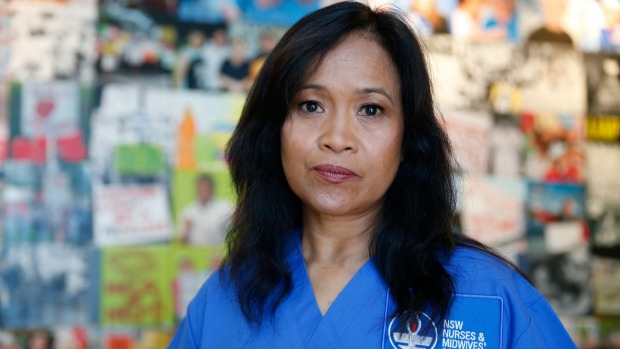 Jocelyn Hofman, a registered nurse from the Blue Mountains, told Fairfax she was concerned changes to nursing laws could be dangerous for residents in nursing homes. Photo: Peter Rae

NSW nursing homes should be forced to have registered nurses on duty to care for patients, a NSW parliamentary inquiry has found.

But the committee has recommended that not only should it be continued for all homes that look after people with higher care needs, but that the NSW government should lobby the Commonwealth, which has responsibility for monitoring aged care facilities, to improve the system of monitoring and unannounced visits for aged care facilities.

The inquiry also heard nearly 100 NSW nursing homes have failed to meet accreditation standards that protect vulnerable residents’ health and safety over the past three years.

NSW Labor Health spokesman Walt Secord, who was on the committee along with Liberal, National and Greens members, said he hoped the government accepted its unanimous decision.

“NSW Health Minister Jillian Skinner owes it to older Australians to protect them by resisting commercial for-profit aged care providers who want to reduce oversight and protections like requiring registered nurses,” he said. “Sadly, the evidence of the committee lined up in two disparate groups – those who wanted to protect nursing residents and those who wanted to protect the rivers of profit flowing into the pockets of commercial aged care providers.”

Federal changes to the way nursing homes are funded last year essentially abolished the distinction between “high care” and “low care” homes, and instead directed funding towards individuals. This meant that NSW legislation that mandated all high-care facilities had registered nurses essentially became invalid.

Nearly 600 affected facilities have been operating under interim legislation requiring them to continue to employ registered nurses if they did so previously.

However, providers of commercial and not-for-profit nursing homes have argued that the rules do not give enough flexibility to aged care providers and if they continued would lead to a nurse shortage.

Charles Wurf, the head of Leading Age Services NSW-ACT, told the inquiry that providers were responsible and would never give less care than was needed.

“Nobody I would work with… would have any less than registered nurses 24 hours a day,” he said.

NSW Nurses and Midwives Association general secretary Brett Holmes said people were extremely distressed at the prospect of losing registered nurses and the government should accept the findings of the inquiry.

The association has submitted more than 24,000 signatures on a petition to NSW Parliament that advocated retaining the positions.

“Thousands of community members across the state have spoken out on this issue and the minister must listen to these constituents,” he said.