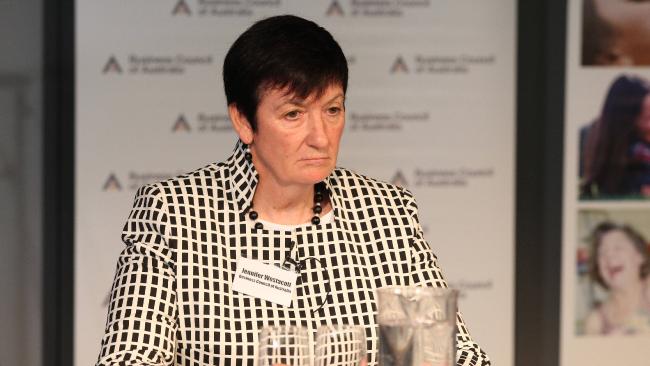 Business Council of Australia chief executive Jennifer Westacott says the health system must be reformed to allow patients to gain real-time informa&shy;tion on the performance of hospitals. Picture: Hollie Adams

Low economic growth and its constraint on government revenue will force cuts to Australia’s health system unless it is reformed to tackle unsustainable spending increas­es.

A reform summit organised by the Business Council of Australia and including some of the nation’s leading health experts has been told the fee-for-service culture in the system is driving up costs and that a more consumer-orient­ed approach must be adopted.

BCA chief executive Jennifer Westacott told The Australian the health system must be reformed to allow patients to gain real-time informa­tion on the performance of hospitals or clinicians and the current culture of fee for service must be curtailed to reduce unsustainable spending.

She said some of the privacy constraints had to be challenged “because consumers want data, they want to be in charge of their health’’.

The BCA called some of the nation­’s leading health experts to a closed-door summit in Sydney, building on the National Reform Summit in August sponsored by The Australian, The Australian Financ­ial Review and KPMG.

Federal Health Department secretary Martin Bowles, the chief executive of SA Health, David Swan, and NSW Health Department secretary Mary Foley also attended. A background paper prepared with the assistance of McKinsey & Company warned that healthcare spending had outpaced economic growth, rising from 8.3 per cent of GDP in 2003 to 9.4 per cent in 2013.

Out-of-pocket spending had risen more than 2½ times over the past decade and the long-term finan­cial sustainability of the health system was “uncertain’’.

“The long-term rise in healthcare costs is colliding with Australia’s current financial headwinds. If mismanaged, this could limit the accessibility and breadth of healthcare services,’’ the paper said. While the global financial crisis­ had driven reform in other countries, Australia was “virtually alone in maintaining the number of hospital beds per capita, suggesting a growing mismatch with the shift in demand for care from acute treatment to management of chronic diseases”.

The paper said that current reim­bursement models may not reward efficiency with fee-for-service payments encouraging physicians to increase the volume of care. Potential effic­iency gains could be found in improving the quality of care delivered to people with chronic disease.

Ms Westacott said governments had “run out of money effectiv­ely to keep chasing the system in its current form’’.

The challenge for governments in big spending programs was not to make ad-hoc cuts “but to redesign them around the consumer in a way that lowers the costs, gets better outcomes and reduces­ waste’’. “Why are we paying for bad outcomes?’’ she said.