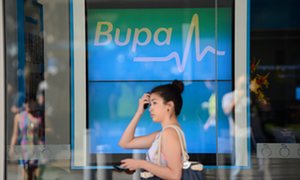 A Bupa private health insurance store in Brisbane. Sussan Ley says a review of the industry will seek opportunities to amend ‘unnecessary and inefficient regulation which adds costs for the consumer’. Photograph: Dan Peled/AAP

The Turnbull government is paving the way for changes to “inefficient” regulation of health insurance in Australia, prompting doctors to warn against moving towards a US-style system where private funds play a much greater role in primary care services.

The health minister, Sussan Ley, said she would soon seek public feedback on private health insurance so the government could frame policies to “deliver the best value for consumers first and foremost”.

Ley signalled that the health department-led review could have a broad focus, although she sought to avoid buying into specific options, including whether the government was still aiming to eventually wind back Labor’s decision to save the budget billions of dollars by means testing the private health insurance rebate.

Insisting she did not have a predetermined view of what the review should recommend, Ley indicated the process would explore “opportunities to amend unnecessary and inefficient regulation which adds costs for the consumer”.

“Consumers are becoming increasingly concerned with the value for money – or lack thereof – they are currently receiving from their private health insurance products, as are taxpayers, with an annual $6bn investment,” she told the National Press Club in Canberra on Wednesday.

The president of the Australian Medical Association, Brian Owler, urged the government to tread carefully if it was considering a greater role for private health funds in primary care, including visits to general practitioners.

“That could involve setting up the boundaries for private health insurance and the rules for how they engage with particularly general practice and what they’re allowed to fund and that they don’t have the ability to do things like say you can only refer to this group of doctors or you can only order ‘x’ test or ‘y’ test,” Owler said.

“We’ve got to make sure by having them engaged in general practice they’re not introducing a US-style managed care system by stealth.”

But Private Healthcare Australia, which represents 21 health funds, said the process should provide an opportunity to dispel the myth that funds should have no say in the care delivered to their members.

The industry peak body said funds were “in possession of figures indicating that prostheses which regularly fail continue to be used and there is evidence that some hospitals give people Golden Staph more often than their competitors, but funds have no power to direct members towards better care”.

The chief executive, Michael Armitage, said: “If the government approaches the consultation with an open mind, it will allow the industry once and for all to address a number of the myths about the industry that are propagated by opponents of the industry and people whom the industry pays for their services on behalf of our members.”

However, a consumer advocacy group voiced disappointment at the limited scope of the government’s plan for public consultation.

The Consumers Health Forum’s chief executive, Leanne Wells, said the taxpayer-funded private health insurance rebate had failed to take pressure off the public system, and the Productivity Commission should conduct a broad inquiry.

“The underlying challenges facing health insurance are not just related to the soaring premiums, shrinking cover and regulatory problems but to the impact of private health cover and its cost on the health budget, and supply and demand of other services like public hospital care,” Wells said.

“Many lower and middle income Australians feel obliged to take out insurance because of the rules and their fear of waiting lists in the public system. Yet those same people are now being sold policies which effectively restrict coverage to public hospital care.”

The government has yet to release any specific terms of reference to guide the consultations, but said people would be able to submit comments online. The health department would also talk directly to industry and consumer representatives about ways to improve the value of private health insurance.

Ley said she had asked the former Australian Competition and Consumer Commission chairman Graeme Samuel to provide technical advice to the department.

Owler said while he welcomed the review, it was one of several the government had launched in the health portfolio with “really no overarching theme or vision for what our health system should look like in 10 years’ time, so it’s really difficult to see how all these reviews are working together on a coherent basis”.

Labor’s health spokeswoman, Catherine King, said the government’s health policy remained “mired in the chaos and confusion of the Abbott era”. She said Ley’s comment that everything was on the table was “ominous”.