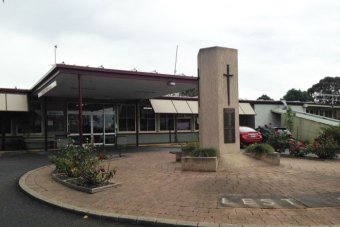 Photo: The Djerriwarrh Health Service in Bacchus Marsh was subject to major probe into a series of baby deaths. (ABC News: Guy Stayner)

There are concerns the agency responsible for investigating the deaths of 10 babies at a regional Victorian hospital is under-resourced, Federal Greens leader Richard Di Natale has said.

The hospital’s former director of obstetrics, Surinder Parhar, had conditions placed on his registration in June following the 28-month investigation by the Australian Health Practitioner Regulation Agency (AHPRA).

The Health Department and Djerriwarrh Health Services (DHS), which runs the hospital, were not told about the conditions, though Dr Parhar was reported to AHPRA by another doctor in 2013.

Dr Pahar has since retired.

Senator Di Natale, a former GP, said the agency’s role in what has been described as a “catastrophic failure” of governance needed to be investigated.

“AHPRA clearly has an important role to play – there are concerns about its resourcing and its capacity to do this job in a way that it needs to be done,” he said.

“But before we lay blame on one particularly part of the system, let’s ensure that this investigation is fully completed.

“We’ve got families here who are grieving, they deserve a full and frank investigation … and they deserve to know that the mistakes that were made won’t be repeated again.”

He said he believed it was an isolated issue, but that it could happen again, and systemic problems needed to be looked at.

“If they didn’t then we need to look at why they didn’t do that, and if that’s a question of resourcing or capacity, then clearly we need to address that as well.”

Dr John Ballard, who was appointed to the DHS board earlier this year as a delegate of the Health Minister, said the health provider had not recognised early warning signs.

“We are putting in place measures to ensure that the present and future safety of the health service and maternity services are in place and importantly, providing support to staff,” he said.

“The situation has arisen due to the services at times operating beyond the scope of its capability, gaps in skills and training and multi-systems, failure to recognise and act on early warning signs.

“I wish to give an assurance that with the support of the Royal Women’s Hospital and Western Health, that this is a safe service.”

But he acknowledged that it would take “some time” to rebuild the trust of the community.

“There is extensive education and support for staff, there are new resources and equipment,” he said.

“This is a painful and complex issue for the women and families involved and I wish to reiterate on behalf of every member of Djerriwarrh Health Service our most profound apologies.”

On Friday, Victorian Health Minister Jill Hennessy demanded AHPRA explain why the investigation took so long, and why the department and health services were not kept informed.

“It is difficult to be convinced how this could possibly be in the interests of patients.”

Senator Di Natale said in some cases there was a reason why the public were not immediately told when doctors under investigation.

“In some instances what you’ll find if the investigation itself has no basis and that the doctor has acted appropriately, we don’t want to create concern within the community that doctors who are being investigated have done anything wrong,” he said.

“But clearly in this case there appears to have been a catastrophic failure in clinical governance.”

The review led by Professor Euan Wallace found the perinatal mortality rate at the hospital was significantly higher than the state average and much higher than expected for a “low risk” unit.

He also identified misuse or misinterpretation of foetal heart rate monitors by “inadequately skilled” staff and a lack of “high quality staff education” as key problems.

“Just the fact that foetal heart rate monitoring in an obstetrics unit, that it appears that practitioners weren’t doing that properly – that says to me that there are serious alarm bells here,” he said.

“Foetal heart rate monitoring in an obstetrics unit is a very basic skill.”

said the service was committed to looking after the women whose babies died and ensuring maternity care was safe at Bacchus Marsh.

“Everything that can possibly be done to ensure the well-being of the women and families whose babies died during this period, is being done,” he said.