Duke University, Oregon Health and Sciences University and John’s Hopkin’s University are the latest institutions offering ways for people with certain conditions to participate in various clinical studies and daily, weekly and monthly surveys. The effort, which collects data via the iPhone and, in some cases, an Apple Watch, is a part of a greater effort to ultimately improve patients’ health and the ability to care for them.

Now, six months after ResearchKit was announced in March, there are app studies available for autism, epilepsy and melanoma. Here’s a closer look at each new app.

Duke University: Autism and Beyond app

Duke University’s Autism and Beyond app uses questionnaires and facial recognition videos to screen for autism and other developmental disorders in young children. The researchers said kids often go undiagnosed for years, and identifying the condition early on is key to their development. While the app isn’t for diagnosing autism, it is a way for families to receive feedback about how to deal with tantrums and when to seek out additional help from healthcare providers.

“Our goal is to develop a screening, like hearing or eyesight at schools,” said Guillermo Sapiro, Ph.D., a professor of electrical and computer engineering. “They don’t get glasses; they get a referral.”

For example, the front-facing camera of the iPhone can record a child’s reactions as he or she watches a video, and that data is captured by software to assess the emotional response. Duke researchers are also looking to launch the app in other regions, including China, South America, North America and South Africa.

One of the best ways to prevent melanoma — in addition to wearing sunscreen and avoiding the sun — is to keep track of your skin and moles. The Oregon university developed a MoleMapping app to track if moles are changing in a quantitative way. Through the app, a user takes a photo of a certain area of the body — let’s say an arm — and lets you track a mole based on measurement, location and monitoring over time. You give each one a name and a common reference (like the size of a dime) to see how it has changed.

The information that the app collects now is private. Users decide if and when they share that data.

About 1.5 million patients in the U.S. have epilepsy, and 40% have seizures that are not controlled with medications. When unpredictable seizures occur, they can manifest as spacing out for a minute or two — where activities such as driving or showering present a huge issue — or it can occur as convulsions. Often times, people have warning signs leading up to a seizure.

John’s Hopkins University wants to develop an app that can be used to detect future seizures. For now, it has created one to help collect data that occurs before, after and during a seizure, by using the sensors in the Apple Watch. Although it may not be easy for a patient to notify the watch in real-time when they are having a seizure — a caregiver can activate the watch or if someone gets warning signs, they can alert the wearable ahead of time, too — the app asks a series of questions after a seizure.

Some inquiries include what type of seizure they had, were there any triggers (lack of sleep, caffeine, etc.) and if they skipped their medicine. Heart-rate tracking is also a factor, which is a tool built into the Apple Watch, and often spikes during a seizure. Right now, patients tend to see doctors with a list of notes detailing this type of information, so this is also an easy way for physicians to see patterns.

Why researchers want in

Researchers have been putting up fliers around college campuses and city centers to get people to participate in medical studies for decades. But the methods for obtaining this type of quantitative data has always been a challenge and has been largely unchanged. Allowing patients to download apps and opt in to various studies this way, researchers are gaining access to pools of data they wouldn’t otherwise be able to collect.

In fact, Stanford University’s ResearchKit-based heart disease app, which collects data about physical activity and cardiac risk factors, was downloaded more than 41,000 times after its initial launch. Last month, the university recently launched overseas in the the U.K. and Hong Kong, marking the first time iPhone users in these countries can participate in a medical study through the tech giant’s platform. 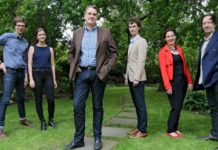 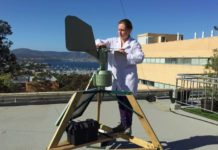 App to track allergy and asthma symptoms unveiled in Tasmania