Forget your Fitbits and Jawbones — there’s a new fitness wearable on the market, and it can actually help save the world.

UNICEF announced a new partnership with Target on Tuesday to sell a child-friendly fitness band, which helps kids in the U.S. become more active while at the same time saving the lives of malnourished children around the world.

The UNICEF Kid Power program revolves around the wearable fitness tracker and its accompanying mobile app, challenging kids to reach various fitness goals and also learn about new cultures. These actions earn them points that “unlock” life-saving therapeutic food packets, which UNICEF then delivers to families with severely malnourished children in developing countries.

The partnership is an expansion of the successful pilot program in three select cities earlier this year. Approximately 12,000 students in Boston, Dallas and New York collectively walked more than 500,000 miles in March 2015, providing 188,850 food packets for 1,259 malnourished children.

Now the program will extend beyond schools, with Target as the exclusive retailer for the one-size-fits-all fitness bands, which will be sold online for $39.99 beginning on Nov. 29 (available for preorder today), as well as in select stores starting in 2016.

Disney will also be a partner, offering special Star Wars-themed bands as part of its Force for Change product line.

The initial idea for UNICEF Kid Power came from mirroring statistics that showed 1 in 4 American children is underactive, while 1 in 4 children globally is malnourished (about 50 million children worldwide, 16 million of whom suffer from the most life-threatening form, severe acute malnutrition). The U.S. Fund for UNICEF started the initiative to tackle both problems head-on.

“We’re going to continue to do it in schools, because we know the impact of doing it in a classroom environment,” Caryl Stern, president and CEO of the U.S. Fund for UNICEF, told Mashable. “But we also wanted it to be a family experience. We wanted Mom and Dad to have the opportunity to put technology to good, and to instill in their children that sense of giving back — of getting active, getting healthy and saving lives.”

The UNICEF Kid Power partnership is “one of many ways Target is focusing on wellness solutions like wearable technology that meet our guests, team and communities where they live, learn, work and play,” said Laysha Ward, Target’s chief corporate social responsibility officer.

A number of celebrities and athletes will also support UNICEF Kid Power — Grammy-winning recording artist P!nk is the national spokesperson, while NBA basketball player Tyson Chandler, soccer player Alex Morgan and WNBA player Maya Moore are also on board, among others.

This star power is part of the effort to galvanize people around the issue of world hunger. At the moment, due to lack of funding, Stern said UNICEF can only help 17% of the 16 million children suffering from severe acute malnutrition, but her goals remain ambitious: She wants 1 million American children to save the lives of 1 million children around the world.

“Obviously I’m talking to you as the president and CEO of the U.S. Fund for UNICEF, but first and foremost, I’m a mom,” Stern said. “I cannot imagine the heartbreak of being a mom who can’t feed her children … In the year 2015, we should be able to make sure that all children get a meal.”

You can pre-order the UNICEF Kid Power fitness band here. Eligible schools can apply for the 2015-2016 school year here. 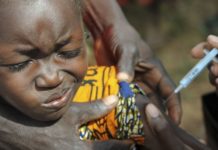 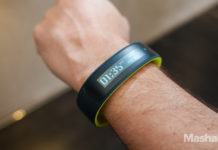 HTC targets fitness fanatics with its first wearable, the HTC Re Grip 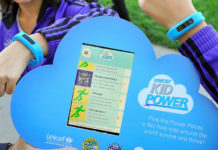