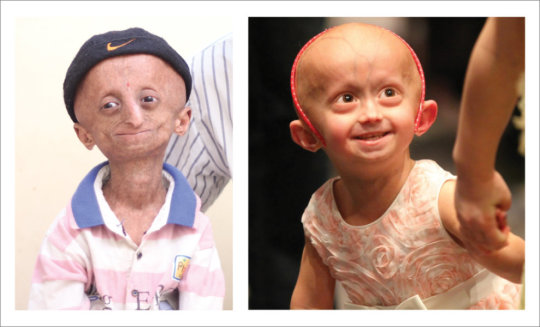 17-year old Nihal from India and 4-year old Zoey from the United States, both suffering from progeria.
Credit: Photos courtesy of the Progeria Research Foundation

Progeria, a premature aging disease, is the research focus of Roland Foisner’s team at the Max F. Perutz Laboratories of the University of Vienna and the Medical University of Vienna. Children suffering from progeria die at an average age of 14 to 15 years, often from heart attacks and strokes. So far, there is no cure for the disease, and though researchers identified the abnormal protein behind the disease — progerin — the exact way in which it causes the accelerated aging remains elusive. In their latest publication in Genes & Development, Roland Foisner and his group describe a yet unknown mechanism behind progeria that may provide new approaches for therapy.

Children suffering from progeria are born normal, but from age one to two their disease starts to resemble premature aging in some aspects. So by the time they reach their teens they have typical age-related conditions such as brittle bones, stiff joints and severe cardiovascular disease. In the end many die from strokes and heart attacks before reaching their twenties. Presently, there is no cure for progeria. Patients can be treated with drugs called FTIs (farnesyltransferase inhibitors), which were initially developed to treat cancer. These drugs improve some aspects of the disease, such as bone structure, arterial stiffness, and increase estimated lifespan by at least 1.6 years.

Progerin: the protein behind the aging disease progeria

Progerin, a protein present in very high concentration in progeria cells, is known to be responsible for many of the characteristics of the disease. It is a mutant version of lamin A, a protein crucial for the stability of the nucleus and involved in many essential nuclear functions. How progerin exerts its effects exactly is the reseach interest of Roland Foisner and his team at the Max F. Perutz Laboratories — a joint venture of the University of Vienna and the Medical University of Vienna. They investigate the molecular functions of nuclear lamins and their mutated forms such as progerin and associated diseases.

“A few years ago, we and others found that progeria cells have much less LAP2α than normal cells. LAP2α is a protein that interacts with lamin A to regulate cell proliferation, the process that produces new cells. Interestingly, LAP2α levels also decrease during normal aging,” explains Roland Foisner, Deputy Director of the Department of Medical Biochemistry of the Medical University of Vienna. Supported by an Innovator Award from The Progeria Research Foundation, senior postdoc Thomas Dechat and PhD student Sandra Vidak in collaboration with Tom Misteli from the NIH National Cancer Institute (USA) developed a cell line that allows studying the molecular mechanisms behind progeria in the lab. Vidak says: “The cells that produce progerin had really low LAP2α levels compared to normal cells. But when we re-introduced LAP2α we could completely rescue the proliferation defect of the progeria cell line. The same actually happened in cells from patient samples.”

Unexpected interplay between LAP2α and progerin

Further experiments revealed a real surprise: LAP2α functions very differently in progeria cells compared to normal cells. Usually it binds to a distinct nuclear pool of lamin A and slows proliferation, so low LAP2α levels result in hyperproliferation. But in progeria the opposite is the case, cells proliferate much slower and prematurely enter the cellular aging process. The reason for this is that progeria cells do not have the nuclear lamin A pool. This hinted that LAP2α uses a different route to exercise its function in progeria cells. In the end, data from previous experiments gave the researchers the clue to solve the puzzle. “Cells are surrounded by material that structurally supports them. It is called extracellular matrix or in short ECM. It was reported before that progerin negatively affects the production of ECM proteins, leading to a disrupted cellular environment and slower proliferation. Now we connected this to the low LAP2α levels and when we reintroduced LAP2α into progeria cells they again produced normal ECM and proliferated normally and didn’t enter the cellular aging process,” describes Vidak her findings.

The study’s insights why and how progerin impairs the production of ECM proteins and normal proliferation opens new avenues towards the development of more specific therapeutic strategies for the treatment of progeria. As the premature aging disease resembles in many aspects normal aging, the results also allow drawing conclusions on the cellular processes during normal aging.

The above post is reprinted from materials provided by Medical University of Vienna. Note: Materials may be edited for content and length.